It’s been a while since I’ve talked about the Freebooter program. With Gen Con fast approaching (too fast), I figured I’d throw you an update! One of my favorite aspects of the Freebooter program is that it’s so accessible to the casual volunteer, but there are plenty of upcoming rewards for the more hard core. We’ve had many event demos at game stores and conventions both. We’ve had demo sessions run on the east coast and all the way down under for PAX Australia. While most of our Freebooters are from the USA, we have a few spread out in other countries such as England, Canada, and Spain. And of course, the aforementioned Australia. 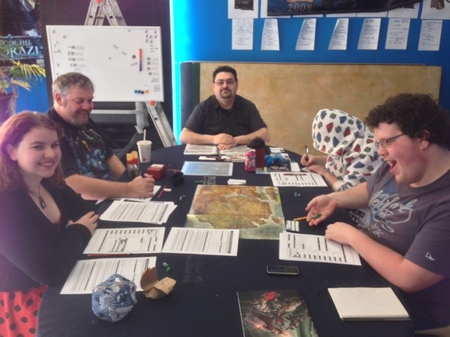 The Freebooter membership shows an equal balance of experienced and newbie Game Masters, with a variety of different demo styles. It’s been quite exciting to read the reports! Of course, they’re not all 100% positive. There can be many challenges to face as a volunteer, especially when LGS owners & convention runners aren’t familiar with your company or products. Luckily, we’ve got some pretty friendly volunteers and it’s a pleasure to work with them.

Gen Con will be the first time I’ll be meeting many Green Ronin fans and Freebooters. We have a good amount of games on the schedule, which all filled up pretty fast. Alas, we couldn’t have as many games as we’d like, especially for the huge amount of requests for some Song of Ice & Fire! Some of the games are being run by fans we know; some are people who didn’t go through us at all! If you find yourself at a table, you’ll know an official Freebooter as they’ll be wearing THIS spiffy shirt! 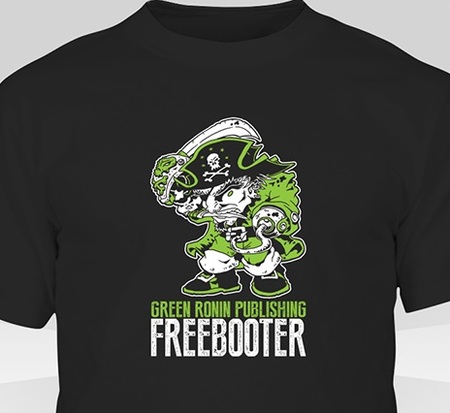 If you’re sitting at a table with a Green Ronin game, mention our program! We’ve been working to get the word out, but every little bit helps. The more volunteers we have, the bigger we can be for next year’s Gen Con.

We’re very thankful for all the folks who signed up to run games this year. Thanks to James & Aaron from Vigilance Press, Mark & Tim from Evil Fleet Productions, Neall Price, Steven Jones, Jamie Wood, Ken Hammerle, James Baize, Glenn Loos-Austin, Kerry Connell, and Mark Bannon for getting Green Ronin games on the schedule!

Even if you didn’t manage to get into a game, please drop by and see us at Booth #1703, right inside the exhibit hall doors! We’d also love your support at the ENnies!

Can’t make it to Gen Con? You can watch the award show live!

Have a safe and wonderful Gen Con!