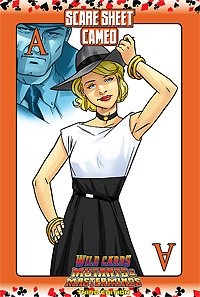 A retrocognitive trance-channeler, Cameo is a gateway for the dead to return to the land of the living temporarily, by possessing her body, so long as she has some keepsake of theirs to hold. As part of the bargain, dead aces can use their powers as well, but who is the real Cameo and what’s life when you’re always with the dead? (For Mutants & Masterminds Third Edition.)