Just in time for the holidays, Steve Kenson has surprised us with Crisis On Christmas, a Third Edition update for this classic Mutants & Masterminds adventure. And best of all, it’s free, from us at Green Ronin to all of you. 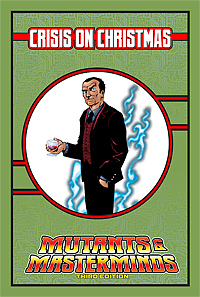 What the heroes hope to be a peaceful holiday season turns decidedly strange when Mr. Infamy threatens the beliefs and hopes of children across the world, by holding Santa Claus hostage! If something isn’t done, the world may be denied the hope and joy of the Christmas season!

Crisis on Christmas is a holiday-themed adventure intended for a group of four to six power level 10 heroes, although the Gamemaster can scale the adventure to make it suitable for higher or lower level heroes
by increasing or decreasing the power levels of the challenges as appropriate.

The adventure is set in Freedom City, but it can be set in any city suited to your own series. All the necessary material to run it is included here and in the Mutants & Masterminds Hero’s Handbook.