Chris and Nicole are flying back to Seattle from a well-deserved break on the beach in Puerto Vallarta, so let’s welcome them home with a new Atlas of Earth Prime PDF: Mexico! 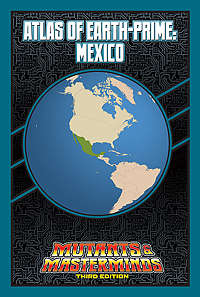 Go South of the Border with the Atlas of Earth-Prime to the land of the Snake and the Eagle, where the mysterious mastermind known as Ghostwalker has been shaping mystical forces for generations, powers that are now coming to fruition. The Weeping Woman La Llorona haunts the guilty souls of Ciudad Juarez, the high-tech #Hashtag fights crime (and blogs about it) in western Mexico, while Viento Negro is the dark-clad hero of Monterrey. Who is the dread undead crime-lord Tepalcatli and what are his schemes for the Silent Zone and the Mask of Aztlan?

Note: One piece of art is delayed, but if you pick it up now we’ll let you know when you can re-download with the final art.