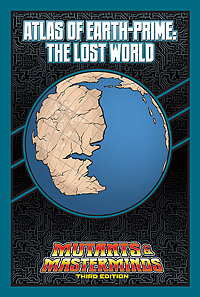 Brave the savage wonders of the Lost World, from the marble halls and great arena of Nova Roma to the god-ruled mountain civilization of the pteranodon-riding Incas, team up with the Slayer or Zandar the Jungle Lord, and explore the Lemurian ruins of the Serpent People.

Atlas of Earth-Prime: The Lost World