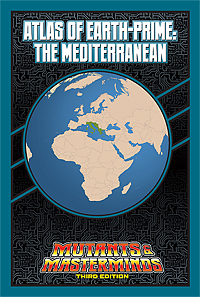 Our crack team of Super-Geographers is back from a long research mission, having saved the world a few times along the way. Thanks to their efforts, Earth-Prime still turns and today’s Atlas of Earth-Prime issue for Mutants & Masterminds, The Mediterranean, is available now!

Once the center of the western world, the Mediterranean is still a land rich in history, culture, and opportunities for adventure. From the Straits of Gibraltar and the secrets of the great rock, to the ancient gods of Greece and modern heroes like the cyber-centaur Professor Chiron and Stella d’Argent, the Star of Italy. Nations once part of the communist bloc face new challenges with the aid of their own heroes, while lands once part of ancient myth see the mingling of magic and modernity.

Atlas of Earth-Prime: The Mediterranean