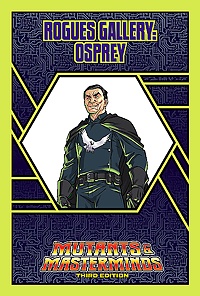 A man of mystery, the Osprey is a crafty, ruthless predator who methodically stalks and kills “heroes.” He is the anti-Raven—a defender of lawlessness and an enemy of the good. The Osprey is a genuinely evil, cold, and calculating genius who takes pleasure in systematically dismantling the lives of heroes. He’s unlike any foe your heroes have ever faced.