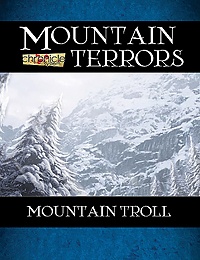 Dangerous horrors of the highlands, mountain trolls are near-human creatures that live – and hunt – in packs. Aggressive and violent, they have been the death of many a traveling party over the years. Beware the troll-infested demenses of these monsters, for it is almost surely death to enter them.

Mountain Terrors: Mountain Troll is a bestiary PDF for the Chronicle System, the rules engine that powers our popular A Song of Ice & Fire Roleplaying game.