We have two new Mutants & Masterminds PDFs for you today, Rogues Gallery: Tesla Girl and Atlas of Earth-Prime: Central Europe. 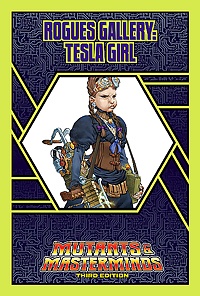 The mistress of steampunk! The harnesser of lightning! The genius of a new age of technology! And she’s only in grade school! A true super-genius who’s on her way to becoming a serious threat and seriously evil! Will the heroes treat her as a joke or offer some guidance? Their choice could make a big difference. 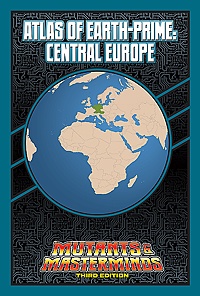 Central Europe is featured in this week’s Atlas of Earth-Prime. It includes an overview of European organizations that exist in the world of Earth-Prime, with special attention paid to SHADOW, SWORD, OVERTHROW, and MENACE. It introduces the larcenous Countess Carat, provides a history of Germany’s association with super-beings, gives a look at the cyborg bikers and enforcers known as the Dreckete Partie, and shows off both the heroic team known as the Bundesguard as well as the villainous Fable Gang and much more — such as Ajax, the guardian of Amsterdam and the hidden city of Ondersdam. 11 full pages of ideas and inspiration for your M&M series!

Send your heroes to Central Europe for just $1.99