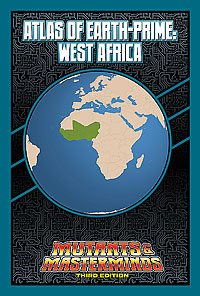 The Atlas of Earth-Prime heads to the 15 nations that make up West Africa. Inside, you’ll meet the Champions of West Africa, a team made up of heroes from across the region, with members including Exemplar, Jali, Genome, Maitre Aimant, the Futurist, and Fantasma. Together, they protect the region from threats such as King Claw and his followers in Righteous Fire. Another hero, Mr. Twist, concerns himself with refugees in the region and has set up the Refuge to offer a safe place to stay, at least for a while. There’s more going on in Niger, Senegal, and Sierra Leone, where the son-of-a-villain known as Brodha Renbo tries to prove himself a true hero.

Ronin Round Table: Let’s Get Cosmic
Scroll to top Skip to content