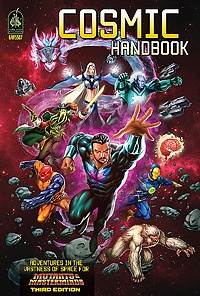 Cosmic Handbook is now available for pre-ordering in our Green Ronin online store, or you can get the PDF by itself. If you do pre-order the hardback, when you check out you’ll be offered the PDF version for just $5! To take advantage of that offer, when it pops up make sure to click “Add to Cart” and then click “Check Out.” (If the offer doesn’t show up for you, please let us know at custserv@greenronin.com.)

The cosmos is a vast realm of primal powers, alien empires, and wonders and dangers beyond imagining. Now it is yours to explore with The Cosmic Handbook for the Mutants & Masterminds Superhero Roleplaying Game. This sourcebook looks at the universe beyond Earth, from the history of the cosmic in the comics to the conventions of cosmic stories and characters. In the pages of The Cosmic Handbook you will find advice and rules for creating characters and adventures in the depths of space. GMs get ready-to-use villains, from space tyrants and aliens to nigh-omnipotent cosmic beings, and an expanded look at the universe of Freedom City and Emerald City beyond the bounds of Earth. 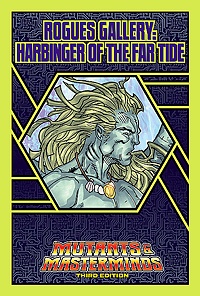 Also now available for Mutants & Masterminds is the Rogues Gallery: Harbinger of the Far Tide PDF, for just $1.95.

The Earthly manifestation of a preternatural being from beyond space and time. The existence of the Harbinger of the Far Tide makes it clear to those in-the-know that far darker, far more powerful beings are on their way. Your heroes have never faced a threat like this before.