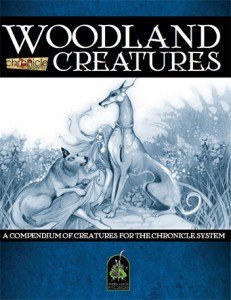 Over the past year-and-change, we here at Green Ronin have introduced a line we call our “Chronicle Creatures” – a series of PDF supplements featuring all sorts of creatures for the Chronicle System, the rules “engine” that powers our A Song of Ice and Fire Roleplaying.

Of course, these creatures are not from George R.R. Martin’s A Song of Ice and Fire setting. Though that series has a handful of creatures both mythic and terrifying that have appeared in its pages, these never have. That said, there’s no reason a creative Narrator can’t make use of them for their personal chronicle, of course. One of the great pleasures of A Song of Ice and Fire is when its lost magic and myths make an appearance, often to the confusion and fear of its characters.

Here are some suggestions for using some of the content of our Chronicle Creatures PDFs in Westeros. Please keep in mind that these are very much non-canon, of course.

Chronicle Creatures are divided into three categories: “Beasts,” which are large and ferocious animals, like the direwolves of Westeros, without any overt sentience or magic; “Horrors,” like the dragons of Westeros, with distinct ties to magic and/or some measure of intelligence; and “Legends,” like the Children of the Forest or the Others, entities of magical potency whose existence has fallen into legend…until they make a come-back in your chronicle.

Our first bestiary PDF, Woodland Creatures focuses on creatures that dwell in wooded or forested areas. It opens with some new rules, including Domain Drawbacks, a set of rules for training animals, and some basic stats for the sorts of regular animals that might be found in woodland areas (including bobcats, elk, hawks, owls, and the like).

The Beasts of this supplement fit very easily into Westeros. Many of the “dire” creatures fit very nicely into the wildernesses north of the Wall, where other giant beasts roam; the Battlehorn, a giant caribou or reindeer, the Devourer, a massive weasel-like beast, and the Dire Wolverine might all easily be found in those wintery expanses. Butcher Birds, massive carnivorous flightless birds, and Claw-Wing Lizards, which might be mistaken for small dragons, all fit nicely into southron climes, whether in the hazardous wilds of Essos around Qarth, or perhaps even in the hot mountains that separate Dorne from the rest of Westeros. Rounding out the Beasts is a handful of giant insects, from ants to spiders to wasps.

The Horrors of this supplement also have some excellent fits for Westeros. There are several strange fungi, plants and even diseases, such as Black Web fungus, the Cocoon Tree, Scavenger’s Rot, and the insidious Skullwort, all of which cause various forms of strange maladies and afflictions (including a weird zombie-like state for victims of Scavenger’s Rot). Mighty beasts such as Barghests and Gryphons (including a Greater Gryphon variety for truly majestic creatures) are found herein, as are the Weirdlings, the strange entity that results when a victim wanders into one of the pockets of old, strange forest magic in the deepest forests.

The Legends of these woodlands are frightful. Terrifying intelligences, such as the Crossroads Guardian, the Headless Knight, or the Hag of the Dark Woods await unwary travelers in any forest. Creatures closely tied to the forces of death and the otherworld, such as the Corpsehorse or the Tall Man make excellent terrors in places that have seen a great deal of death or that lay under curses. In contrast, the River Wardens are massive turtles that would be very at home in any large river – particularly the rivers of Essos that were once the home of the Rhoynar.

This supplement focuses on mountainous areas, from icy places such as the Frostfangs beyond the Wall, to the hot dry mountains one might find north of Dorne. The introductory section (a free PDF) includes some normal animals of these areas, as well as animal training rules and some rules that focus on the hazards of high terrain, such as landslides and avalanches.

Its Beasts range from the cold-dwelling creatures such as Avalanche Wolves, whose howls bring down torrents of snow and stone from the ledges above their prey to the massive Stonehorns, dire rams whose horns are made of the minerals they eat from their environs. Flying creatures pose a risk here, as well, including the Needle Roc, a massive eagle with porcupine-like spines that sweeps past and evicerates its prey and the Skullcrackers, massive flying lizard-beasts who drop heavy stones onto their victims with frightening accuracy.

The Horrors here include strange creatures, from the Cloud Leopards that haunt fog banks and low cloud-cover becoming almost invisible and only partially solid within them to the slithering Snow Eels that worm their way through snow banks to the Thunderbirds that hunt when it is storming.

Finally, there are two Legends of the mountain heights. The first is the Alpingast, a beastly meat-eating humanoid that haunts high mountain passes and hunts with cunning ferocity. The second is far more mystical – the Devourer’s Shadow, a great two-headed vulture-like bird-beast whose body is almost never visible, though it’s great shadow gives its hunt away.