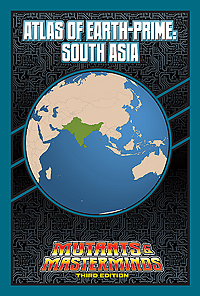 We’re starting off 2016 with a new Atlas of Earth-Prime issue.

The Atlas of Earth-Prime visits South Asia where we visit the strange Temporal Tunnels and the Monks of the Fourth Age who serve as its guardians. Next we’re introduced to the monkey-trickster Hanuman who enjoys sowing chaos. Duiyu Lieren is a patriotic Communist hero and sorcerer who hunts down superbeings on the run from China’s government. Bandhana City, India introduces us to Instant Karma, a team of superheroes who stand against the Indian underworld. In Nepal, the time-controlling Oathkeeper searches for a mysterious being known as the Oathbreaker, and we get more information about the Rakshasa as well as the mysterious Third Eye and his Lighthouse base.

Green Ronin in 2016
Scroll to top Skip to content