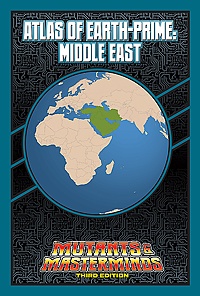 Today the Atlas of Earth-Prime visits the Middle East. From Armenia and Azerbaijan to the nations of the western Mediterranean and the Arab Peninsula, the Atlas looks at a region torn by conflict, where heroes are needed. The mysterious Ash’Abah (the Ghost) tries to keep the factions of the Gaza Strip from killing each other, while Aziz, the armored hero of Iran, denies rumors that his technology will be used for any nation’s weapons-program. Dr. Tzaddik in Israel studies ancient legends saying the blood of the Djinn and the Nephilim flow amongst the people of this region, while the Unseen Imam guards mystic secrets in his desert tower.

Add the Middle East to your Mutants & Masterminds campaign, today!

Ronin Round Table: We Could Be Heroes…
Scroll to top Skip to content