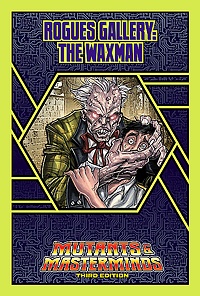 Waxman has the ability to sculpt his own flesh just like he does his beloved wax sculptures! More than that, his touch allows him to sculpt or melt the flesh of anyone he chooses. Now a mad outcast, Waxman preys on the living in order to give him raw material for his wax creations.