We have completely revised the Narrator’s Kit for A Song of Ice and Fire Roleplaying, and it’s available now! 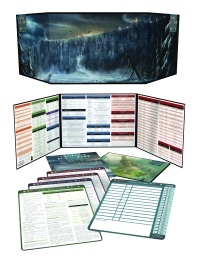 As a narrator you have your hands full when running the game, but that just got easier with the Narrator’s Kit for A Song of Ice and Fire Roleplaying. This handy accessory features a 3-panel hardback screen with useful tables and charts on one side and a beautiful illustration of the Wall on the other, as well as a full color poster map of Westeros and a 16-page introductory adventure by Steve Kenson. It also includes 4 quick reference cards that put key rules at your fingertips, and a combat tracker that you can write on with wet or dry erase markers.

Kickstart your chronicle with the Song of Ice and Fire Narrator’s Kit!