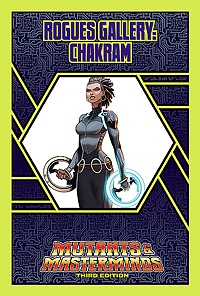 A talented stuntwoman tried to stand in the way of a villain and was casually tossed aside, ending her career. However, the experience triggered latent powers–powers she now uses as a villain-for-hire. Unlike villains motivated by greed or insanity, Chakram is a pro and has earned the respect of the people she works for.