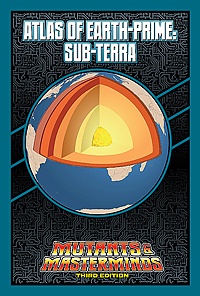 The penultimate Atlas of Earth-Prime entry is here! Learn about Sub-Terra and the strange creatures that inhabit Earth-Prime’s “underdark!”

From the surface…to the center of the Earth! The realm of Sub-Terra appears to lie deep beneath the Earth’s surface, and at least part of it does, but its twisting tunnels and vast caverns connect to an inter-dimensional realm inhabited by Morlocks, Serpent People, Fomorians, and ancient, ruined, and abandoned cities, including Agartha, the stronghold of the surface man who proclaimed himself the Terra-King, ruler of the Sub-Terran realm. You can send your heroes to explore the mysteries of Sub-Terra, or have its inhabitants surface to challenge them!