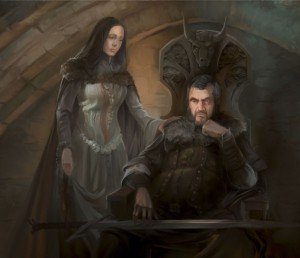 Running a campaign of A Song of Ice and Fire Roleplaying can be quite involved. As the Narrator, you have to breathe life into the setting with interesting Narrator Characters, keep the plot moving forward (with or without the player characters!), evolve the storyline to respond to the players actions, and on and on.

It’s great fun, but it’s also a lot of work.

Once you’ve been doing this for a while, though, you figure out some short cuts. So, to make your lives easier, I figured I might share some of my favorite resources that I use to make life a little easier.

Just click on the name of the site below to go to it!

A Wiki of Ice and Fire

Probably the first and most indispensable of these resources is the Song of Ice and Fire Wiki. These are the fruits of the labors of a huge population of dedicated and knowledgeable fans. There are timelines of what happens in the books, detailed examinations of major (and a few minor!) characters, descriptions of a variety of important locations in Westeros and beyond…there really is a little bit of everything there.

Though created for another setting entirely, the castles on this page are wonderful. They are relatively simple in design (I believe most of them were made in MS Paint!), but excellent for all that. They really capture the authentic design of a great many of the castles that inspired those in Westeros, so if your group doesn’t have someone who wants to design the interior details of your chronicle’s castles and keeps, this is a great place to turn. They even remember to include privies and jakes!

This site has a huge and interesting collection of random generators. While many of them are more appropriate for other higher-fantasy settings, there are some crazy useful ones. My favorite is probably the Medieval Demographics Generator, which lets you enter the population of a settlement, and it’ll generate the space it takes up, details of who rules it, and provides a population breakdown by job. Great stuff.

Though pretty simple looking in design, this name generator manages to capture a great deal of the flavor of Westerosi names. If you’re like me, you’re always in need of some name or another, so this is a great one: generate a list of fifty mens’ names and fifty womens’ names and you’re pretty ready to go naming Narrator Characters.

This is from one of my personal bookmarks, and it’s great for generating one of the many Narrator Character Houses in the game. This utility can be used to generate a random House, using the rules for House Generation in A Song of Ice and Fire Roleplaying. It works quick and well, with some great history and detail all the way around.

Last but very, very far from least is the online Heraldry Generator from Inkwell ideas. It’s a nifty system that lets you set the details of the noble Houses that populate your part of Westeros, giving House symbols and colors to each of them. The nice thing about this set-up is that you don’t have to know what you’re wanting to create going in. You can browse the options and toggle those that interest you all you like.