I hated writing this week’s Ronin Round Table.

However, I kind of felt I had to.

See, awhile back I paid tribute to the late great David Bowie by suggesting ways to draw inspiration from the musician’s songs for rpg plots, campaigns, adventures, and stories.

My reasoning for doing this was, I believe, sound. The idea was that while Bowie wasn’t a gamer, his music entertained many of us who were and he was definitely a player of roles who enjoyed adopting different identities and reinventing himself.

Then Prince died. Born Prince Rogers Nelson, he passed away on April 21st, 2016, leaving behind a staggering body of work and a great history as both a songwriter and performer.

All those things I said about Bowie applied to Prince.

And with that, despite really wishing there was no reason to do so, I set about doing the same thing with Prince’s music as I did with David Bowie. Because while his songs have different themes and imagery, they can inspire other stories and tales just as easily.

Now, like Bowie and many other artists, not every song is going to work for this sort of inspiration. In fact, a lot of Prince’s later work while obviously deeply personal to him also has a lot of fairly targeted message or meaning and unlike David Bowie, he didn’t know his life was nearing an end and plan and develop his music accordingly. Many of Prince’s recent albums also had limited releases, making them not nearly so widely known.

But that doesn’t mean there isn’t plenty to work with, especially from his earlier work. And so, here we go.

Thieves in the Temple

This one is pretty direct. The song itself would make a great soundtrack for an adventure. In a fantasy setting, the temple of the goddess of love is beset by thieves. The criminals seek to steal an important relic from the temple. With the relic gone, the goddess will withdraw her patronage from the temple and the city, turning love itself away from the populace. Without love, parents reject their children, couples split or turn on each other, and things get very bad very quickly. By the way the relic is a golden icon that looks like this: 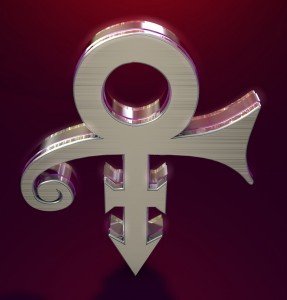 Can the PCs stop the thieves and return the relic? How long can the city survive without love? What do the thieves want? Why would they do such a thing? Who could they possibly be working for? Well…

Seven ancient and powerful sorcerers devoted transforming the world into a place of corruption and oppression have risen. They were thought dead and defeated long ago, but they have returned. The relic stolen by their agents is part of the secret to defeating them and allowing the world to advance to a golden age rather than falling into despair and ruin. Of course, it’s going to take a lot of intellect and savoir-faire to defeat the seven and their armies of followers. Still, they stand in the way of love so hopefully the PCs can smoke them all and someday all seven will die.

I Would Die 4 You

Sometime ago, an angel fell in love with a mortal they were assigned to protect. It’s not woman, man, or something that you can really comprehend. However, when the divine protection was withdrawn and the angel was ordered to let the mortal perish as part of some cosmic or divine plan, they refused. Rejecting their divine powers, the now-mortal angel seeks assistance from the PCs in protecting the love, who isn’t even aware of the angel or their feelings. Can the PCs protect the angel’s would-be lover? Can they bring the two together? Or is the mortal already in love with someone else?

Furthermore, what is the threat to the mortal and why did the angel’s superiors suddenly pull their protection. Is the mortal a threat to cosmic order? Do they hold some terrible or amazing secret? If the PCs help the angel and their love, are they risking some greater doom?

This adventure can work in nearly any setting, from supers to fantasy, though how much the PCs can do and what sorts of threats they might deal with would vary with the exact campaign setting and genre.

Let’s take a step back to the end of the last millennia. There were definitely some people suggesting that the world would end or forever change around that time. Now of course it didn’t.

But what if it had?

What if it was New Year’s Eve, 1999 and some major world-shattering event happened? What if its 1999, the PCs are all at a kickin’ party and the sky starts falling? What do they do? What can they do? Can they save the world, or will they just have to survive what’s coming?

The genre and type of game affect this idea greatly. In a supers game you can probably stop the threat and save the world. In a horror game you might be lucky to even have some of the PCs survive the night. In any event remember that your PC’s life is just a party and parties aren’t meant 2 last.

It can be fun to take something written dripping with innuendo and just totally ignore it, interpreting everything just as it seems on the surface.

Because if you do? The lyrics of this song just screams “Supervillain!” Shaking, losing control, and possibly exploding whenever this person is near? Maybe the poor soul can’t control their effect on people but that’s still really extreme. PC heroes have to avoid losing control of themselves when they get to close to this villain and find a way to shut down their powers of there will be widespread chaos and calamity.

Okay it’s a favorite of mine but…yeah, not going to do that sort of role-playing inspiration here. Honestly there are a couple of really great Prince songs that probably fit into this category. Or a couple dozen. Moving on…

Not a happy song. A really darned bleak one, in fact. But it paints a picture for a compelling modern urban noir with a bit of glam around the edges (because its Prince, everything is going to have that). By itself the song doesn’t suggest a theme or story, instead it sets a mood where heroes try to fight the darkness growing from daily cynicism, corruption, and despair. You could slap this in front of a game styled as an “HBO style” cop or detective game and you’re all set. Maybe throw in the opening for Let’s Go Crazy at some point too.

Well, there we have it. And it’s just some of the songs from not only Prince but many other talented folks that we can use to inspire our own creations.

Now hopefully I won’t be back in a few months to do this for Tom Waits or something. I honestly might start a riot.