“We thought it was just a bad year. Illness spread through the streets, and we blamed rotten food. Neighbors disappeared, and we blamed the cutthroats. But the truth was far worse. A cult of maniacs had begun to loose ghouls in the sewers nearby. No one believed us, and no one helped us. So we learned how to fight the undead ourselves. And I learned how to do it better than anyone else.” 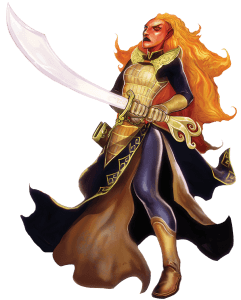 Janica is a third-generation citizen of Kizmir, and the granddaughter of Captain Janyr Flameblade who commanded the sailing ship Sultan’s Fist 102 years ago when the azhar Sultan Mustafa VI invaded the southern coast of the Continent. Her grandfather was at the front of the forces that marched northward and helped claim the land that is now the nation of Kizmir, and in return he was rewarded with lands and privileges. Along with several other ex-soldiers, Janyr founded Tzeset, a large town in northern Kizmir lying between the Ozkurt Forest and the Broken Land. The people of Tzeset turned their eyes to the woods of the Ozkurt Forest, and began to conquer them.

The trees on the northern edge of the Ozkurt are ancient, tall, and strong, making them perfect for long keels and high masts. Felling these trees and shipping them south to the nation’s capital of Milsar has brought wealth to Tzeset for more than fifty years. Such work is not without risks – kobold warrens often raid the logging operations, and larger, more dangerous creatures sometimes attack out of the Broken Lands, but within the stout walls of the town the families of Tzeset grew wealthy and content. As long as the lumber continues to be shipped to Kizmir’s great shipyards, to ensure the sea fleets of Sultan Mourtos II (Master of the Azhar and Keeper of the Eternal Flame) are always expanding, the Sultanate does not much care about local affairs.

Normally, this suited Janica and her family quite well. Fiercely independent, the azhar townsfolk enjoyed being largely left to their own devices. When the logging went well, the town would hold great festivals. When it went poorly, if the effort to cut the wood was too costly or some threat proved bloody to overcome, the townsfolk banded together and pushed on. Janica’s family were well respected and rich, and used their considerable resources to help the less fortunate in bad years.

Then came a very bad year.

Illness spread rapidly through Tzeset, and dozens died. Entire logging parties failed to return from the woods, and supporting farms were razed to the ground. The azhar were saddened, but not overly concerned. Raiders from the Ivory Ports sometimes attacked outlying groups and monsters from the Broken Lands had caused damage in the past, but the town itself was always safe. Many of its bravest and boldest went out to find the cause of their ills, and set them right. Janica, more interested in business than warfare, paid such efforts no heed.

Until none of the brave heroes returned.

The situation within the town itself grew worse. Dismembered bodies were found in the street. Strange symbols were etched in alleyways. The town’s sewer system, a marvel of underground engineering built by gnomish experts from Iovan, began to echo with growls, moans, and cries for mercy. New disappearances occurred every week, and those who wished to flee the town soon discovered that small parties outside the town walls at night were beset by pale humanoids each night, and suffered even greater losses than those in Tzeset. Janica’s family organized patrols in the neighborhoods near their manor, and Janica did not hesitate to join them. From above the mantle, she removed her grandfather’s massive falchion, supposedly forged in the City of Brass itself, and carried it over her shoulder.

Both lone couriers and large, armed parties were sent to outlying towns and even Milsar, begging for help. None came.

As the deaths and disappearances mounted, panic began to set in. The attackers grew more bold, bursting out of the sewers, covered in the stench of the place, to slash with long claws and bite with sharp teeth. Their victims often made no effort to defend themselves, and whispers began that the attackers were so horrific that to see them up close was to be paralyzed with fear. There appeared to be no safe refuge, no way to flee, and no hope of aid arriving.

Janica’s family did not panic. They gathered together those friends and allies who still trusted them, and made a simple statement. This evil comes from the sewers. So into the sewers we must go, to seek out the source, and destroy it. Janica and each of her parents swore to lead whoever would follow in three parties, to assault the major entrances of the sewer all in one night. They asked for aid from hundreds of the people of Tzeset. When they gathered that night, they were joined by fewer than two dozen.

Janica’s memories of that night are confused, and drenched with blood. Within the sewers were the horrific monsters of fang and claw, and the scent of them was worse than the smells of the sewers themselves. But there were also elves, humans, and even a few azhar, dressed in tattered robes marked with yellow sigils, and if anything they were worse than the pale creatures of fang and claw. Many of Janica’s allies died that night, but so did many of their enemies. And Janica discovered she could, if pressed, unleash her inner fire, her ancient hereditary connection to the efreet, and release a light so pure, the horrid pale attackers fled before it.

Janica’s family hauled several mangled, clawed bodies to the surface, and showed the town the face of their horror. The creatures where white, with long elven ears, but hairless and hunched. They smelled of putrescence, they left wounds that festered, and their touch could paralyze. The Flameblade family searched the records of their family and found a name to put to this evil – “ghouls.” The next night, armed with scores of emboldened townsfolk, the Flameblades struck into the sewers again. And the night after, and the night after that.

For three months, Janica and her parents lead the assaults into the tunnels and chambers beneath their hometown. Janica studied every ghoul corpse her group killed, and read every manual found on the increasingly rare yellow-sigil-marked cultists. Many of the people of Tzeset became adequate ghoul hunters, but Janica excelled. The town blacksmiths forged armor for her to wear, and her growing militia called her “Flamefist,” to honor her accomplishments.

For a season Janica led the people of Tzeset in reclaiming their town. The ghouls became less and less common, and then suddenly one night there were none. The town’s sewers were fully mapped, with every new chamber and crude tunnel explored. The cultists had fled, leaving behind only a few notes on rituals used to create ghouls, and a vague mention of returning to “our brethren across the sea.” For the town of Tzeset, the long horror was over.

But not for Janica Flamefist.

She and her militiamen carried word of the attack to Milsar, and personally put it in the hands of the Sultan’s head Vizier. She then bid her militia return to their families, and stepped on a ship headed east. In her hand she clutched a scrap of a cultist’s journal, on which had been scrawled a single word.

Return to Freeport, Part One: The Curse of the Brine Witch (Pathfinder Adventure...
Scroll to top Skip to content