Today we present two new Mutants & Masterminds PDFs, one from our Atlas of Earth-Prime series, and the other from our Rogues Gallery series. 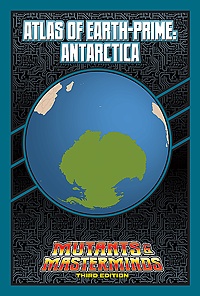 One of the final frontiers on Earth, the continent of Antarctica is a frozen no-man’s man, not claimed by any one nation, but under international management and protection, safeguarded against exploitation, and reserved for scientific research and natural development. Still, the eons of Antarctic ice conceal many mysteries and dangers, from ancient alien artifacts to the lost members of the Ice People and the secret headquarters of the world’s most sinister organization. Antarctica is the final installment in this PDF series. 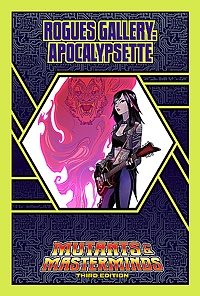 Michiko had a passion for extreme metal and serious talent as a player, but she was a rich girl, so no one took her seriously. Then she bought an old guitar previously owned by a 1960s rockstar who played early heavy metal. When the guitar arrived, so did a mysterious stranger who offered her the same bargain the previous owner had taken before dying; she took the deal. Now with her dark side unleashed, she can call forth demons, use dark, destructive magic, and shred with the best of them!