First and foremost it’s important to realize that specializations aren’t prestige classes or sub-classes you see in some other games.  There simply isn’t enough mechanical “oomph” in a single three tiered ability tree to cover various character elements the way a multi-level class overlay or substitution used in games like Pathfinder or D&D does.

And really? That’s okay. Because what Fantasy AGE specializations allow players to do is to combine them with talents, focuses, and other specializations to create highly customized characters.

So a specialization that makes you an expert axe-fighter, no matter how cool it is, won’t substitute for having the Axes focus. Or various talents to better swing, throw, and fight with your chosen weapon in various ways.  You will still want all of those things. And as the character advances if you decide you want to be an expert axe-fighter who is also adept at hunting down renegade sorcerers and evil mages? Well, you’re going to want to invest in the Mage Hunter specialization when you get a chance—likely customized to use Axes instead of Black Powder Weapons with its Novice rank.  Such combinations are how you build your “prestige class” for your character in Fantasy AGE, often making particular combinations of character abilities that are very distinctive and unique to most other characters around.

With these limitations and advantages to the system in mind, when designing specializations, it’s important to add mechanical elements that push a character upwards or sideways from other talents, class abilities, and the like, avoiding those things which simply replace an existing ability.  Don’t add a Novice specialization rank that takes another talent and makes it useless. On the other hand, don’t create an ability so overpowered when combined with another talent that it becomes a singular optimal build.  Neither one is particularly satisfying, and will result in specializations that are either too weak or too inflexible to be useful beyond a specific type of character.  So to use our axe-fighter example again, it’s cool to add a rank that lets you do certain stunts easier if you’re using an axe.  But don’t offer discounts on stunts that are already made easier by other talents.  That’s not a unique cool ability, its redundancy.  Likewise, don’t make an ability that’s pretty useless unless your character is dual-wielding axes, as this shuts out the character who uses two-handed, single weapon and shield, or single weapons.  This forces everyone with the specialization into basically the same or very similar builds.

Of course sometimes these rules are broken.  A specialization might be crafted with only single weapon fighting in mind or a talent ability might combine to make an expensive stunt cheap as part of a specialization’s core concept.  But in most cases, you’re better off with diverse powers and abilities that complement each other and provide neat options, instead of mere substitutions and numerical upgrades.

Also, when designing your own specializations as GMs or as players (with GM approval and aid), remember to treat specializations generally. Designing a specialization just for your PC might seem like a great idea, but it’s actually a really easy way to unbalance your character and not always in your favor!  For example, it might seem like a great idea to craft a warrior specialization that requires every strength and aptitude your PC already possesses and stacks potent abilities on top of talents and class abilities you’re already using.  But what happens if in a few levels you realize that more powerful monsters, more cunning foes, and more dangerous threats don’t fall to your “killer combos” as easily as their lower-level predecessors did.  Often, designing for more general utility within a theme is more useful and its certainly easier to apply to multiple characters in a campaign. 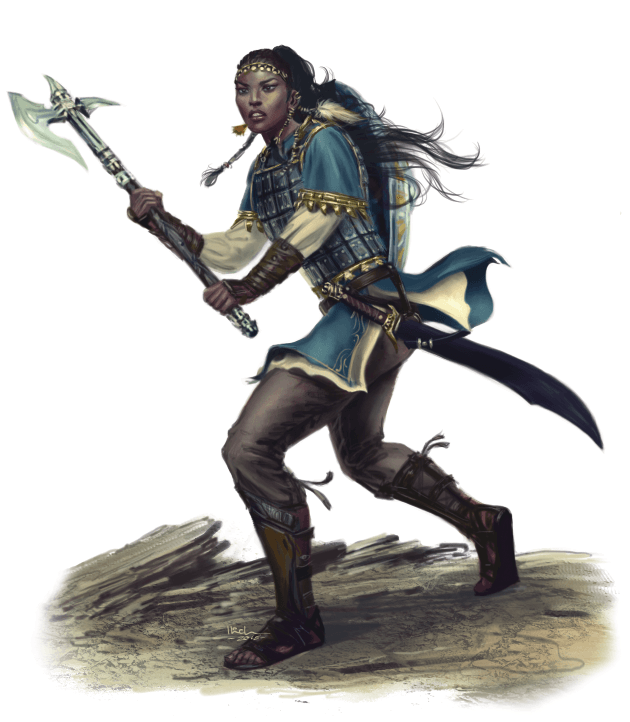 So with all that said, let’s look at how to build a specialization.  We talked about the Axe-fighter, so let’s give them a try.  I’m envisioning a specialized warrior, perhaps hailing from particular cultures, who are devoted to mastery of the axe in its various forms.

First this new specialization needs requirements.  These are usually relatively easy to reach, but not a foregone conclusion.  They also tend to include at least one ability score that best reflects a natural aptitude or particular physical or mental training.  In this case a few requirements are obvious. Given the concept and weapon involved, it seems like this would be a warrior-based specialization.  Also Weapon Group Axes would be required.  A focus with axes is so useful it’s hard to imagine most pursuing this specialization without it, but I’m leaving it off since it isn’t strictly required…just recommended.  To these obvious requirements I add a Strength of 2 or greater—it takes a lot of power to get and keep this sort of weapon moving effectively, especially the bigger ones.

With requirements out of the way, you need a Novice, Journeyman, and Master rank abilities.  These should match up roughly with talents or other specializations already in existence in Fantasy AGE.  For example, an ability that allowed a reduction in the cost of a stunt is roughly the same as many other talents.  A stunt cost reduction that only works in certain conditions might be a bit weak by itself, suggesting such abilities should allow for reductions in multiple stunts.  Balancing these is a bit of art and science, but with some practice it becomes fairly easy.

In the case of the axe-fighter specialization, it makes sense that even Novices would learn to always ready an axe with a free action.  However, this makes the novice level Quick Reflexes talent and Journeyman rank Thrown Weapon Style talents less useful.  So instead, let’s design an ability that reflects the ability of the fighter to throw an opponent off guard and seize an opportunity with a flurry of axe strikes.  Thus let’s say that as long as they’re using an axe on an attack, a novice rank axe-fighter can use the Seize Initiative stunt for 2 SP instead of 4.  Note: This is identical to the Scouting Journeyman talent.  But that’s a rogue talent…so it’s not rendered redundant by this warrior-only specialization.  Also, since it only works with axe attacks, it’s a bit weaker than the Scouting talent, which means making it novice rank specialization seems appropriate.

Now for the Journeyman rank.  It seems that axes are often considered to be scary because they can be used to deliver nasty blows and even glancing blows can be serious. Nobody wants to get hit by an axe and those skilled in its use are aware of this. So how to translate that into a Journeyman ability? You could give a discount on the Threaten stunt but we’ve already done a SP reduction so let’s consider an alternative tact. A Defense bonus might work, but that’s very similar to the Single-Weapon Style Talent. So instead let’s take this another way: the reason people are scared of axes is because getting hit by one is freaking horrible. Even if you armor stops most of it? It still hurts. So it makes sense Axe-Fighters can do serious damage with their axes. Again we might do a discount on Mighty Blow here that’s a Two-Handed Style rank. So instead let’s step sideways from those talents and provide a non SP discount bonus to Mighty (and Lethal) Blow and give an extra 1d6 damage when using Mighty Blow with an axe. Nasty to be sure, but it requires a particular weapon and a stunt at full cost, balancing out the effect.

Finally we have Master. Master rank Specialization qualities are at the core of the Specialization and can be quite nasty. So what’s the core of an expert axe-fighter? Striking hard and fast, keeping a foe on the defensive, and battering past armor and shields all apply here and what does that suggest? It suggests opening up a foe and finishing them off.  So what Master ability represents this? There are many options, but I’m going to go with two “lesser” abilities. First is the ability to use variant of the Disarm stunt to “hook” or bash aside a shield. This eliminates the shield bonus of a character until they take a Ready action to restore it.  The shield isn’t tossed aside like a Disarm against a weapon, but it is rendered useless for a time.   That’s pretty cool, but it only affects shields, so we should add something else. Let’s examine that against opponents who don’t have a shield to hide behind? A skilled axe fighter is very dangerous to attack as they’ve got a heavy, sharp weapon swinging about. So against unshielded foes? Axe-Fighters gain a Defense bonus, let’s say +2 because of the Master rank and limited use.

So there we have it. Your very own Axe-Fighter Specialization:

Novice: You may use the Seize the Initiative stunt for 2 SP instead of 4 when wielding an axe.

Journeyman: When using the Mighty or Lethal Blow stunts with an axe, add an additional d6 damage.

Master: You can use Disarm to “hook” shields, removing the shield bonus until the shield-user takes a ready action. You also gain +2 to your own Defense when fighting unshielded opponents.

Nasty, scary, tough, and yet pretty much useless without its chosen weapon, which provides some nice balance.

That’s just an example, but it shows the process of creating new Specializations in Fantasy AGE and is a preview of the process and types of things you’ll see in the upcoming Fantasy AGE Companion.

A writer and game designer since the mid 1990s, Jack Norris has worked on numerous award winning and critically acclaimed publications over the last two decades, including products for Marvel Heroic Roleplaying, DC Adventures, Scion, Mutants and Masterminds, and Feng Shui. He is currently working at Green Ronin developing Dragon Age, as well as co-developing other projects such as Blue Rose. Outside of his work for Green Ronin and others, Jack also designs and writes Tianxia, his own line of wu xia/kung fu action rpg products published through Vigilance Press. When not writing and designing, Jack is an attorney and consultant at the Vidar Law Group, a small Chicago-based litigation firm.