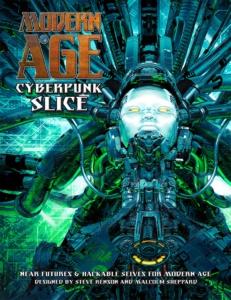 TL;DR – So can I use Cyberpunk Slice with Modern AGE to (ahem) run an urban fantasy cyberpunk game? YES! Grab both books (and maybe Modern AGE Companion while you’re at it) and you’ll rock it!

With the release of Cyberpunk Slice for Modern AGE, AGE System players have a new resource for creating campaigns and finally have an answer to that oft-asked question: “Can I run a cyberpunk urban fantasy campaign using AGE?” To which the answer is very much “Yes! I’m glad you asked.”

Having had some experience with the notion of cyberpunk urban fantasy myself, I’ve given the notion some thought and wanted to share with you the key elements for your Modern AGE cyber-fantasy campaign, what I refer to here as Neon Shadows:

You’re probably going to want to grab the optional backgrounds from Chapter 1 of the Modern AGE Companion, particularly the Dwarf, Elf, Human, and Orc, if your setting includes various fantasy heritages, or people manifesting the traits of fantasy beings. Feel free to add-on to this as you see fit for your setting: Shapeshifters, Spirit-Bloods…more? Why not? Take particular note of the sidebar in the book about adapting Fantasy AGE backgrounds to Modern AGE before you yank them wholesale out of your Fantasy AGE books, as there are some differences.

The ancestries from Threefold (Arvu, Dreygur, Huldra, and Jana) might be useful inspiration, but keep in mind that ancestries supplement backgrounds rather than replacing them per se: You can mix-and-match ancestry and background traits, and might want to allow the same for backgrounds in your Neon Shadows campaign, allowing for Bohemian Elves, Dwarf Laborers, or Urban Orcs, to name just a few examples. 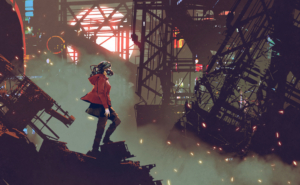 You are going to want to augment the options from Modern AGE with the professions in Cyberpunk Slice, particularly Hacker, Operator, Assassin, and Personality for your Neon Shadows game. Ditto the various cyberpunk-specific Drives and ability focuses, depending on the availability of tech in your game. Intelligence (Streetwise) is pretty much a must.

Cybercombat talent? (That’s combat using various cybernetic augmentations.) Virtual Combat talent? (That’s combat inside of a digital virtual reality.) Yes, please! You’re going to want some (if not all) of the talents in Cyberpunk Slice to go with the Modern AGE Basic Rulebook. There are many of them devoted to making your character badass. In particular, don’t overlook the Kinetic talent, what sometimes gets called a “street soldier” or “street samurai,” just in case you were wondering where that was under Professions previously.

Ah, the gear. There’s plenty of stuff in Cyberpunk Slice before you even get to the implants and augmentations: guns (smart and otherwise), ammo, armor, drones, vehicles, grenades, and more. Everything you need to kit-out your characters. Monofilament whips? Of course! Are they dangerous to use? Of course!

Then (of course) there are the actual augmentations. Modern AGE players who have read Threefold have an inkling of what awaits in Chapter 3 of Cyberpunk Slice, but with quite a bit more. A medium augmentation campaign (with a starting capacity of 2) suits Neon Shadows pretty well, as most characters are going to have augmentations of some sort. Breakdown or some type of Complications tend to suit those who go over their capacity for augmentation.

There’s no strict rule in Modern AGE that says tech and magic don’t mix, so you can make the cyber-arcanist of your dreams, if you want. If, on the other hand, you’d prefer that augmentations weaken arcane power, pick one of the following options:

Naturally, it’s not a cyber-fantasy campaign without some magic, so you can include any or all of the various arcana from the Modern AGE Basic Rulebook as well as Modern AGE Companion and Threefold as well, if you’d like. Decide how prevalent you want arcana to be in your campaign: Do lots of people sling spells or is it just a select few? How is the world dealing with these arcanists?

What’s more, decide if there are any other extraordinary powers available in your Neon Shadows campaign. Are there psychic adepts? If not, you can just ignore psychic powers, or else turn them into arcana also available to spell-casters. Perhaps psychics are occultists as described in Threefold, giving them a different flavor of magical power, rather than science-fiction psionics as such.

You can even use the enhancements from Modern AGE Companion, Threefold, and Cyberpunk Slice for more than just technological augmentations: Some people might be exceptionals with supernatural powers, essentially fantasy or mythic abilities. They might be “advancements” of their ancestry or magical birthrights or blessings or some kind. Perhaps there are “paragons” who focus their magical potential inward and develop the kinds of enhancements otherwise granted by implants and modifications, making them the fantasy equivalents of cybernetic street samurai and biotech stealth assassins, to name a few. There may even be a magical equivalent to capacity—and penalties for exceeding it—in the setting, distinct from the effects of augmentations. Just turn some of the augmentations in Cyberpunnk Slice into magical equivalents, either from focusing inherent magic inwards or even weirder implants using magically-animated materials or grafts of body parts or organs from fantasy creatures. 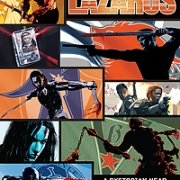 Secrets of Lemuria
Scroll to top Skip to content