What’s In Store: A Song of Ice and Fire Roleplaying, Game of Thrones Edition

We’ve gotten a lot of great feedback from the rare folks who’ve had the opportunity to take a look at the Game of Thrones Edition of our Song of Ice and Fire Roleplaying system, and had even more enthusiasm from folks who are looking forward to seeing what’s in the new edition. So, in the interest of both answering questions and whetting appetites, we thought we’d talk a little about what you can expect in this upcoming book.

Presentation: First and foremost, the Game of Thrones Edition is a big, fat hardcover book, weighing in at 320 pages. We’ve updated some of the layout to better accommodate the material, and even changed out little things like the title font.

Errata: One of the great things about producing this edition of our core rule-set is the opportunity to make some corrections and additions to the system. A couple years worth of heavy play by a fantastic fanbase has provided us with plenty of things that needed correcting, clarifying or just plain revision. What the various ratings in Status mean exactly, for instance, and clarification on the use of certain Abilities and Benefits. Additionally, we’ll be offering a free PDF with a full listing of the errata we’ve updated so that those who are using older rulebooks can still have access to these changes.

Updating: We’ve also taken this opportunity to update some of the rules, based either on later designs that we feel work better, or new revelations to the way things work from further books in the series. For instance, the jousting rules from Peril in King’s Landing not only make for a more in-depth reflection of the excitement and variety of techniques in jousting, but helped us better reflect some of the setting’s assumptions about jousting, as seen in both A Song of Ice and Fire series as well as the Dunk and Egg stories.

Likewise, with the release of A Dance of Dragons, we got a better perspective on how "warging" or "skin-changing" works, and so we’ve updated our own Benefits that cover those techniques. As part of this, we’ve gone back and redone some of the Benefits to more accurately reflect those sorts of changes. As an example, we’ve changed Ward from a Benefit to a Drawback. For those who are curious, here’s the new Ward Drawback:

You were given over to your foster House by your birth House, as surety against future aggression.

You take a –1D on all Persuasion tests with both your birth and foster Houses; each assumes that you speak from a position of favoring the other, and is therefore less likely to heed what you have to say. Additionally, should your birth House take any kind of overt action against your foster House, you may be slain in retribution. 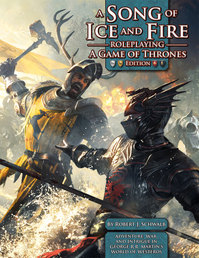 New Art: We’ve got some great new art for this edition, starting with the fantastic new cover piece by the amazing Michael Komarck. There are also some great surprises inside, as well, including a fantastic piece of Balerion the Black Dread, one of the last of the great Targaryen dragons. If you’re interested in that, check out the cover image over at the Song of Ice and Fire Roleplaying Facebook page.

Ready-to-Run Adventures: Finally, we’ve also gone ahead and incorporated not one, but two adventures that Song of Ice and Fire Roleplaying fans love: Journey to King’s Landing and Peril at King’s Landing. We’ve taken the steps to make sure they’re just as solidly updated and corrected as every other piece of this book. The inclusion of these two pieces means some neat additions to the core book, even for those who don’t necessarily want to run the adventures themselves (or have already done so), because we’ve added all the additional stock Narrator characters that were originally in Peril at King’s Landing to the selection of Narrator characters in Chapter 11, for instance. It also means that the corebook now includes a map of King’s Landing, as well as a description and map of the infamous Inn at the Crossroads.

Of course, don’t take my word for it. You can see all these changes and more for yourself when the PDF goes live next week, right alongside the print version pre-orders. We look forward to seeing what you folks think!