Welcome to the New Year, everyone! We hope you had a good holiday season and got in some fun gaming with your friends and family. Now that we’ve moved into 2014, it’s time for my annual overview of where Green Ronin is at and where we are going this year. We ended 2013 on a high note, with the Advanced Bestiary Kickstarter raising over $55,000. Let’s take a look at what’s happening next!

Mutants & Masterminds, now in its 3rd edition, has been a bedrock game for GR since its debut in 2002 and that shows no signs of changing. Right now the long-awaited Emerald City sourcebook at at print and should be in stores next month. This 336-page full color hardback gives you everything you need to set a campaign in Emerald City, including a full length adventure. You’ve seen bits of this background before in Threat Report, but now the city is revealed in all its glory.

Long time fans will be happy to know that Emerald City does not replace Freedom City, but enhances it. Emerald City is in the same setting (Earth-Prime) but on the opposite coast from Freedom City. It thus expands the game’s original setting. And what if you are newer to the game and don’t have the previous Freedom City books? Well, good news, Freedom City is getting its own big hardback this year! Steve Kenson is revisiting and expanding his classic setting for 3rd edition and this will be our big GenCon release.

We will also be expanding the wider setting of Emerald City and Freedom City with a new PDF series, the Atlas of Earth-Prime. Each entry in this series will provide an overview of a different part of the world and developer Jon Leitheusser is trying to work with freelancers from those parts of the real world where we can, so we don’t up with characters like English Tea Time (beware his dreaded cuppa attack!), Kangaroo Boomerang, or other such nonsense. As with previous PDF series, we will collect these up for a print book next year. Last year’s PDF series, Gadget Guides, will see its print release this year.

We are rounding out the year with two more sourcebooks, The Cosmic Handbook and Hero High Revisited. The Cosmic Handbook is a book people have requested for years. It provides rules, advice, and support for campaigns beyond Earth-Prime. Hero High Revisited is an updated and expanded version of Lucien Soulban’s stellar book for 2nd edition about playing teenage heroes. We’re happy to bring this book back and Lucien is already at work adding new material.

This year we are branching out in a couple of different ways. The first is a new card game called Love 2 Hate by designer Colm Lundberg. Love 2 Hate is a party game of finishing sentences and (poor?) judgment. In each round of the game, one player acts as the judge and plays one Starter card. These are cards with nouns on them like Clowns or Lawyers. The judge can say “I love the way…” or “I hate the way…” Each player then plays a Finisher card face down to complete the sentence (for example, “I hate the way clowns subsist entirely on my fear!”). The judge decides who had the best answer and awards the Starter card to that player. Get enough Starter cards and you win!

We have playtested this game many times at GR HQ and it’s a blast. We did a big game at the Green Ronin Summit back in October and after that we all agreed that we had to publish it. The judging mechanic is similar to that of other party games, so it’s easy to pick up. If you happen to be in Ireland later this month for WarpCon, Colm and I will both be there with demo decks in hand, so you can check it out for yourself. Love 2 Hate is currently scheduled for a June release.

The burning question is, of course, where the %#&#@ is Set 3 for Dragon Age? Here’s the skinny. The Player’s Guide is heading into layout. When it’s finished, we’re going to release it as a PDF ahead of the full set, which is slightly unusual but warranted in this case because I know people are beyond eager for this material. When the Game Master’s Guide is finished a few weeks later, we’ll release the full set and put it up for pre-order. Printer willing, we should have the finished sets towards the end of March.

That same month we’ve also got a fun surprise: Dragon Age dice! We’ve partnered up with Q Workshop, whose awesome dice are almost certainly known to you. Each box of dice will come with two full sets for the RPG. That’s six dice total, four with the Circle and Templar emblems on them and two with the Grey Warden emblem and the Blood Dragon (the “Dragon Die” for the RPG). 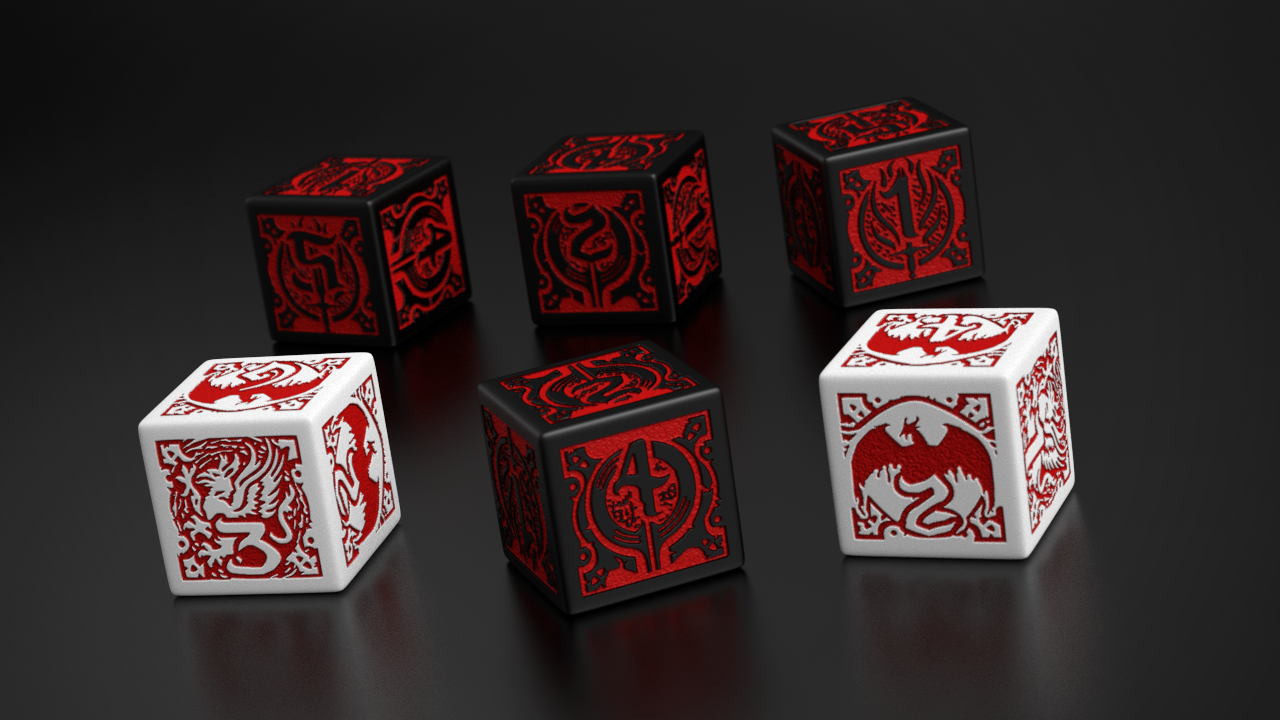 While I am putting Set 3 to bed,  Jack Norris is busy with a lot more support. He’s developing the adventures from The Deep Roads adventure anthology right now. We’ll be releasing the adventures individually as PDFs as we finish them and then collecting them up later this year for a print release. As previously discussed, we’ll also be doing two other PDF series, Faces of Thedas and Encounters in Thedas.

Our AGE Bestiary series will also continue. AGE, short for the Adventure Game Engine, is the system that powers the Dragon Age RPG. AGE products uses the system but not the setting of Dragon Age. We are, as I’ve discussed before, working on another game using the Adventure Game Engine, but we had to make the hard decision to schedule that for 2015. We could not devote the attention it deserved this year and I am not going to rush it out just to have it out.

As many of you know, BioWare has been working on the third video game of the franchise, Dragon Age: Inquisition. We are working with them to determine the best way to support that with the RPG, but that’s all I can say about it right now. We’ll have more news about that later this year.

In 2013 we hired Owen Stephens to be our Pathfinder developer. The first two books you’ll see out of this are Freeport: The City of Adventure and the Advanced Bestiary, both of which were the subjects of successful Kickstarters last year and both of which should come out this summer. Those are two mighty tomes (520 and 288 pages respectively) so that’s keeping Owen quite busy in the short term. If you missed the Kickstarters, never fear. You’ll be able to buy both books when they are done and they’ll be available in stores just like any other of our print books.

We have been discusing what comes next for Pathfinder. We have two overal goals. First, we want to do a mix of brand new material and updates to our classic d20 material. Second, we want to really develop the world of Freeport. Our future material will follow from these goals.

A Song of Ice and Fire Roleplaying is our game based on George R.R. Martin novel series fo the same name (also the source of HBO’s Game of Thrones TV show). The next book for the game is Dragon’s Hoard, a 160-page adventure that should keep chronicles going for some time. The text for that is in for approval right now and we’re hoping to have it out before summer. Once that has a firm release, we’ll talk more about our future plans for the line.

The Chronicle System is the rules engine that powers SIFRP. We released the first in a series of Chronicle System PDFs, Woodland Beasts, last year and will follow it up with more this year. Developer Joe Carriker has been working on several follow ups, including Out of Strife, Prosperity and Chronicle of Sorcery. The latter is just what it sounds like–a magic system! This is something SIFRP lacks due to the nature of the books, but Chronicle of Sorcery aims to fill that gap.

Last year we hired Donna Prior to be our Events Manager. Her biggest job is running our demo program, the Freebooters. These are folks who demo our games in stores and at conventions. We’ve got a good crew but we need more Freebooters! If you want to run games at GenCon, Origins, or other cons, check out the program info and contact Donna. It’s a life of adventure in the Freebooters!

I’ve shared some highlights of what’s coming up but it is by no means everything. We have several projects in the works that we’ll be announcing later in the year. One of them is the subject of our next Kickstarter! We hope you stay with us for another year of great games and good fun. Here’s to a fruitful 2014!