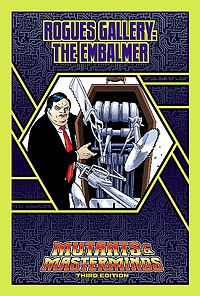 New today for the Rogues Gallery series of villain PDFs for Mutants & Masterminds, it’s The Embalmer!

Handling the dead can be off putting. No one knows that better than the Embalmer. He was once a normal businessman, but a lifetime of being shunned and treated as an outcast finally pushed him over the edge. Now he’s turned his genius to evil and uses a variety of weaponized tools of the trade to get whatever he wants—if he can’t have love and respect, he may as well be rich!

In case you missed them, the previous two weeks’ releases in this series include Lady Lightning and Eclipse Syndicate. You can get those you don’t have yet for just $1.29 apiece!