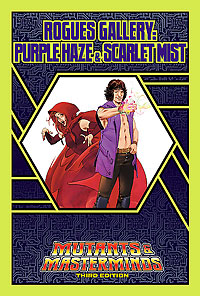 Experimented on by SHADOW in hopes of giving them powers like the reformed villain, Mr. Mist, the twins now known as Purple Haze and Scarlet Mist were always going to be trouble. Adopted by Mr. Mist, who tried to raise them well and teach them to use their powers, but Purple Haze left to pursue a hedonistic lifestyle and dragged Scarlet Mist in his wake. Now the two do what they have to in order to survive!

Get Purple Haze and Scarlet Mist for just $1.29!