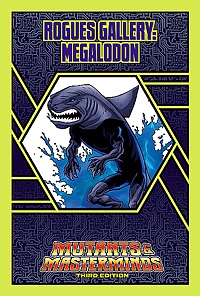 Thursday’s Shark Week freebie is a bonus entry for the Rogues Gallery: a new update of one of Freedom City’s tragic villains. Dr. Connor Kirkstrom is a brilliant man, but knows a savage, remorseless killer dwells inside him. Megalodon the Man-Shark, his bloodthirsty Mr. Hyde, is perversely proud of his place at the top of the world’s food chain, considering all other creatures beneath him. Only other sharks are potential peers, and even they must bow to his superior will.

Let crime take a bite out of you. No charge!
Tomorrow, fans of our A Song of Ice and Fire RPG will get their Shark Week freebie.