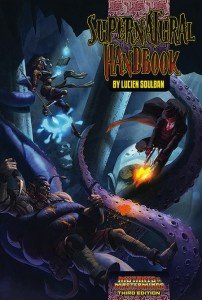 It’s late October, when thoughts turn to the Things That Go Bump in the Night and the variety of Halloween horrors we can bring … not just to parties and film-fests, but to the gaming table.

While Mutants & Masterminds might not be the sort of game that immediately springs to mind when you’re thinking about Halloween horror, not only does the superheroic genre have more than its share of ghosts, ghouls, and Things Man Was Not Meant to Know, but M&M has all of the tools you need to bring them into your game, with the Supernatural Handbook by Lucien Soulban. Here’s just a quick look at what the book offers by way of scaring your heroes:

The Affliction effect (Hero’s Handbook, page 97) can represent the impact of fear and horror on characters. Different creatures may inflict fear by their very presence and different situations may do so as well, just as other hazards inflict Damage. The general assumption in a Supernaturals series is that fear is a hazard just like any other, so most creatures do not pay power points for the “power” to terrify their victims, unless it is in some way special compared to other fear-causing hazards in the series. The typical fear Affliction looks like this:

Fear: Affliction (Resisted and Overcome by Will; Dazed, Stunned, Incapacitated)

So, when encountering a source of fear, the victims make Will resistance checks, with the DC determined by the source of fear, from DC 10–11 for a mild fright all the way to DC 30 for mind-shattering terror. The average should be around 10 + series PL. Falling victim to fear means the character is less able to act and victims get a new Will check each round to shake off the fear; incapacitated characters get a chance to recover each minute.

The Supernatural Handbook also offers an optional system for handling corruption, everything from slow moral decay to the body-horror of unrelenting transformations. When the heroes grapple with monsters, do they risk becoming just as monstrous?

But the book isn’t just limited to game-system tools: It offers extensive advice for Gamemasters on how to create and manage fear and horror in their stories, from a light touch to “blunt force trauma” and from playing with expectations and speculation to keeping players invested in the story and playing along.

It also offers a cunning “Build-A-Critter” series of trait packages, giving you the building blocks to put together endless monsters to challenge your heroes. This works great in conjunction with the prefabricated powers from the Power Profiles book (particularly things like Animal, Darkness, and Death Powers, to name a few). It includes a variety of monster archetypes, including my personal favorite: WTF! (free download)

The book offers the complete organization ARCADE (The American Research Center for the Arcane Defense of Earth) suitable as the center of an entire supernatural series or for inclusion in your regular M&M game as the secret supernatural defenders of the world.

Threat Report for Third Edition M&M is also on sale, as are the Second Edition M&M PDFs Book of Magic and Time of Vengeance.

Check out the Supernatural Sale!