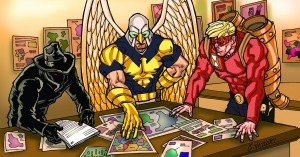 As the Mutants & Masterminds developer, the gaming groups I play with are often treated to sessions of M&M, either to try out some rules or to enjoy some super-hero action. Recently, one of our ongoing non-M&M games was growing a bit long in the tooth and the players asked for something new. After exchanging a few emails and offering up some possible game ideas, we decided on a new M&M series. And surprise, surprise, they thought a Golden Age/WWII-era game sounded interesting. Another surprise, they thought playing a PL6 game might be interesting!

I’ve been thinking about PL6 super-hero games for a while now–not agents, superheroes–so I was pretty excited to get the chance to test how effective characters at that power level would be. I like the idea of lower-powered characters because opponents like thugs, gangsters, and the police are much more of a challenge. Or in this case, opponents like members of the American Bund, Fifth Columnists, and Nazi soldiers.

Once we’d settled on the Golden Age, I started doing some research and looking through source material to come up with some ideas. The first things I grabbed were my various super-heroic RPG books, including M&M 2nd edition’s Golden Age, but I also grabbed a couple of old (now very old) Champions Golden Age sourcebooks. I looked though the timelines of both to find events I thought might be interesting to feature in game sessions, coupled that with online research to figure out exactly what was going on generally in the war and finally to settle on the date I wanted to start the game: July, 1941.

I chose a date before the start of the United States’ involvement in the war because I wanted to have time to get the team together and show what life was like before the U.S. got involved. It also allowed the players to set up their characters’ lives however they wanted without needing to worry about the draft or other wartime conflicts.

During character creation, one of the players mentioned that he’d like to have this game move through generations of heroes. The same player also mentioned he liked the idea of going into outer space. With that in mind, I wanted to set up the series so it could hopefully move through multiple decades as well as into outer space. I still don’t have a 100% solid idea of what will end up happening down the line, but I know the heroes will be dealing with aliens and and I hope to have them create their own “legacy” heroes for adventures in the 1950s, ‘60s, ‘80s, and maybe the modern day.

Already in the first couple of sessions I’ve introduced a very active Bund chapter, super-powered Nazi agents, and hints of alien involvement (which the PCs picked up on immediately). Because the characters weren’t previously very well known heroes and didn’t know each other, I got them together by telling them they’d each received a note (in their secret identities) that directed them to meet with some others on top of a building in Freedom City. They all showed up, concerned it might be a trap and confused about who else they were meeting. That initial encounter immediately led to an encounter with the Bund and their Nazi contacts, which in turn led them to the Nazi’s hideout and the strange technology they possessed, including some “eisentruppen” (iron troopers/soldiers) and something they think is a partially-assembled portal.

After that encounter, their mysterious letter writer, who introduced himself as Augustus Cross, rolled up in his wheelchair, accompanied by his daughter Amelia. It turns out he’s precognitive and knew the heroes were needed to put right things that had started to go wrong in the timeline. He’s dying, but he’s written down his visions, which will be provided to the heroes even after he dies.

Not only did Cross allow me to get the heroes together, his letters allow me to direct the heroes to other adventures, but the “time” aspect of things let me introduce the idea that more than just the heroes’ time period is important to what’s going on. That, along with the alien technology, the Nazis, and the oncoming war, gives me a lot of different threads to work with when coming up with story ideas.

This is a pretty good example of the way I build a superhero series: talk to the players, come up with a setting, do some research, look at the characters, find out what the players want, create some far-reaching ideas, string them together into a web I can hang stories on, then introduce as many of those ideas early on, so the players and characters know what to expect in the future.

I’d love to hear about how you come up with ideas for your M&M series over on our forum, the Atomic Think Tank.

As an aside, I’m a huge fan of hearing about the characters people play in games, so I wanted to provide a list of the heroes in this game, in case you’re interested.

The Basilisk. A rich playboy and amatuer archaeologist who found a scroll that opened his mind, which somehow allows him to subconsciously read thoughts, so he can predict movements, avoid blows, and incapacitate nearby foes with psychic feedback.

Nemean. An investigative reporter of Greek heritage. She’s the current possessor of a ring made from the remnants of the Nemean Lion. It grants her great strength and invulnerability.

Professor Power. A scientist who was crippled in an explosion, but rebuilt using his own technology. He has a clockwork leg and an arm that can fire knockout darts or deliver a powerful jolt of electricity, and wears a force field belt, and jet pack.

The Sagebrush Kid. A gunfighter from the Old West, who encountered some supernatural things in the past, died, and came back. Now apparently immortal and with recuperative abilities, he does what he can to protect others with his six-guns and lasso.

Winged Hussar. A Polish pilot shot down in the war against Germany, but saved by the ghost of an ancestor. He can become ghostlike, raise mists to cloud an area, fly, wields a saber and pistol.