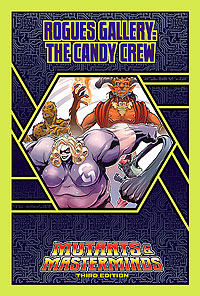 Today we have for you a new Rogues Gallery issue, The Candy Crew.

The original Candy Crew dates back to the late 1960s. A crazy bunch of candy-themed thieves and robbers constantly thwarted by the Freedom League. The current incarnation still has the silly theme, but are much more serious about their crimes. The Candy Czar wants respect and he’s going to get it with the help of Gobstopper, Gumball Rally, Cinnamon Styx, Wicked Licorice, and the Choco-Nut Golem!