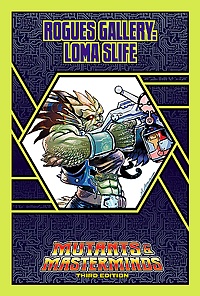 Intergalactic bounty hunter and all-around troublemaker, Loma Slife stirs things up wherever and whenever she shows up. She’s violent, prideful, and loves to find and claim new technology—especially weapons—to use when hunting down whoever (or whatever) she’s been hired to bring in!