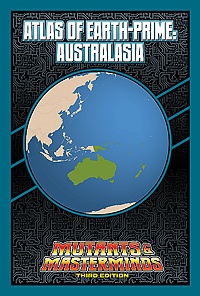 Today the Atlas of Earth-Prime goes down under, to the continent of Australia and the islands and oceans in the Pacific. Written by native Australian Darren Bulmer, this Atlas entry offers an overview of Australia, then introduces us to Federal City and the hidden super-advanced civilization of Warrangina and its hero/leader Wandjina. Also included are the national hero Blue Ensign, the vigilante Nighthaunt, and the Southern Stars—along with descriptions of a number of villains. It also introduces Amphitritus, a sunken city that’s a sister to Atlantis with its own king, Ormor the Aquarian.

Get Atlas of Earth-Prime: Australasia today, for just $3.95!