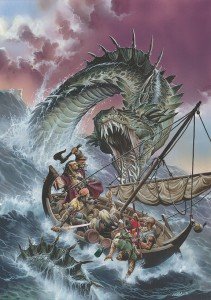 A lot of GMs drawn to Freeport: City of Adventure are relatively new to the Pathfinder RPG, and many who aren’t new to Pathfinder are new to running adventures in a city focused on pirates and cults to elder horrors and serpentfolk. A great deal of advice for both groups is available, much of it in Freeport: City of Adventure, and the Pathfinder RPG Core Rulebook. But especially given how well Freeport allows a GM to draw in options and monsters from any setting, I thought it might be useful to go over a few oft-overlooked basics on building creature encounters in Freeport.

It’s easy to think a pirate-and-cultists setting like Freeport should focus primarily on humanoid foes, but that can be a mistake. First, it gets boring to face nothing but more warriors and the occasional ranger or sorcerer. Second, PCs are much more likely to identify NPC abilities when they are drawn from the character classes the players can also choose from. And third, it means a weapon that is bane against magical beasts isn’t very useful to the player who wields it.

There’s nothing wrong with having lots of humanoid foes, but it’s also easy to add a few animal and magic beast pets or allies, have cultists accidentally summon outsiders, have aberrations lurk beneath cult strongholds, have one of the main pirates happen to answer to a sea dragon, and so on. Freeport draws its inspiration from stories that primarily focus on human foes, but as a fantasy game there’s no reason not to figure out how chuul and hangman trees figure into local adventures.

This one may seem obvious – of course two ogres are more dangerous than one ogre – but this is talking about comparing one foe with multiple creatures that add up to the same CR. When deciding how many weaker enemies you need to reach the same CR, generally if everything is within 4 CR of your target number, you can just add their XP rewards until it equals the same as a single creature of the desired CR.

For example, a CR 3 ogre is worth 800 XP. That means that any combination of creatures that have a total XP reward that adds up to roughly 800 should be about CR 3. You can make this easy and have 3 or 4 of the same creatures (four hobgoblins, for example), or mix and match creatures of different CR that just add up to the same XP reward (two CR ½ giant centipedes, two CR ¼ mites, and a CR 1 giant spider).

As a general rule, doubling the number of creatures increases an encounter’s CR by +2, to two CR 1 giant spiders are as dangerous as one CR 3 ogre. Of course creatures need to be close enough to a group’s level to have some change of effecting them – a herd of eight CR 1 elk make a fair CR 7 encounter, but even 256 elk is no match for a party of 17th level characters.

A group of monsters have multiple advantages, including gaining more total actions per round (which generally means more attacks), being able to spread out enough to avoid all being hit by one spell, and each requiring its own targeted attack, which may force combatants to attack more often even if each attack drops a foe. And, of course, four ogres can’t be taken out with a single bad saving throw against one hold person spell, unlike a single hill giant.

In a pirate-themed campaign based on a city set on an island, it’s reasonable to expect aquatic monsters to show up fairly often. If a GM wanted to put some 2nd-level characters up against something as tough as a boar (CR 2), it would be reasonable to think a CR 2 electric eel would work well for this purpose. If the PCs encounter the electric eel in water shallow enough that they can still run around, or they have a strong boat that prevents them from fighting in the water, or if they have magic that lets them breathe and move freely through the water, that’s true. If the PCs find themselves having to swim in deep water and fight the electric eel without specialized options to deal with being in water, the eel becomes much more dangerous.

This is because monster CR does not make any adjustment based on its environment. If both are able to move around freely, and electric eel and a boar are fairly evenly matched. If the eel is dumped onto to land, or the boar tossed into the ocean, the out-of-place animal is at a significant disadvantage. The same is true of player characters. Especially at low levels the rules for fighting while swimming or underwater (found in Chapter 13 of the Pathfinder Roleplaying Game Core Rulebook) can make it very difficult for PCs to deal with creatures at the same CR as they regularly encounter

The same is true of course for flying creatures with ranged attacks, climbing creatures fought in a web or on a Cliffside, but in a Freeport campaign aquatic creatures are much more likely to come up. There’s nothing wrong with occasionally forcing PCs to deal with the disadvantage of fighting while treading water, but remember that the encounter is going to be tougher than normal. This can be a great way to make encounters with multiple lower-CR opponents more interesting. If a group of 2nd level PCs aren’t up to fighting an electric eel when their boat capsizes, you can instead use two grindylow, which normally make a CR 1 encounter.

Of course once multiple characters can breathe water, polymorph into squids, summon water elementals, and fly, the aquatic environment no longer adds as much of a difficultly to encounters. If they’ve been smart about adventuring on ships and near lakes, a group of 18th level characters should be able to handle a kraken in its home environment jus fine.

Level = CR is a Guideline At Best

Because a creature’s CR is tied to a party’s average party level, many GMs feel they should only use monsters of that CR. However, an encounter with a CR equal to a group’s APL (average party level) is designed to be challenging enough to stay interesting and use some resources, but it’s unlikely to ever feel dangerous enough the players feat they might lose. Over the course of an adventure, a GM should throw in at least a few encounters with a lower CR (it’s good to let the PCs feel tough from time to time, and they’ll likely still burn resources), and at least a few higher than the PC’s APL. Chapter 12 of the Pathfinder Roleplaying Game Core Rulebook notes that an encounter with a CR 1 higher than a group’s APL is hard, 2 higher is challenging, and three higher is epic. Of course as the GM you’ll learn how well your players work together, which can often cause them to handle encounters either much more easily or much worse than average. If you players find an encounter at their APL to be boring, it may be time to make APL +1 the standard for them.

When running encounters with a CR of APL +2 or more, it can be important to use multiple lower-level creatures rather than one much tougher one. Not only does this prevent an anticlimax when a dragon fails a saving throw against the first spell thrown at it and is petrified, it also prevents a GM from using monsters that have abilities PCs just can’t deal with. A lamia is only CR 6, but has access to a Wisdom drain attack. That’s tough enough for 6th level characters to handle. If you use a lamia as an epic encounter for 3rd level characters, the attack becomes something they have no way of fixing, and is much tougher than a typical APL +3.

This can also be a great way to make “boss fights” more memorable. A single CR 9 dragon is a solid encounter for a 7th level party, but it’s still a fight where every PC can focus on one foe and protect against one location. A CR 7 dragon with two CR 5 younger siblings that answer to it is still a CR 9 encounter, the main dragon still has abilities on par with the party, but sudden the PCs are tracking three flying foes rather than one. They should be able to handle it – but they’ll be more likely to remember it as “epic.”

Don’t Worry About Screwing It Up

The Pathfinder RPG has lots of numbers and formulas designed to help GMs know what monsters to use, how much treasure they should have, how many of them to encounter in a day, and so on. It can be overwhelming. That information is useful once you’re comfortable with using it, but none of that is what your players are interested in. When in doubt, throw a monster or two to make an encounter that match’s a party’s APL, give them nothing but gold pieces for treasure, and have fun running an encounter. You’ll get a feel for how the game, setting, and your players work together over time.

Until then, just do whatever makes sense, and get to the fun part.