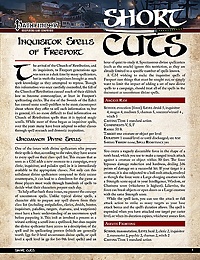 Today we present the second installment of our Short Cuts PDF series. These are tightly-focused PDF products that look at a single topic relevant to the Pathfinder Roleplaying Game. All Short Cuts are appropriate for use with Freeport: The City of Adventure, but can also be easily used in any Pathfinder RPG-compatible campaign setting.

Inquisitor Spells of Freeport is a seven-page, full-color PDF featuring several new spells by Owen KC Stephens. The Church of Retribution brought its inquisitors to Freeport generations ago. This was seen as a dark time by many spellcasters, but in truth the inquisitors brought as much spell knowledge as they attempted to repress. The fall of the Church of Retribution caused much of their eldritch lore to become commonplace, at least in Freeport’s spellcasting circles.

These spells are appropriate for any campaign set in the World of Freeport, especially those utilizing Freeport: The City of Adventure, but can also fit with any fantasy campaign compatible with the Pathfinder Roleplaying Game Core Rulebook.