Welcome! In this week’s Ronin Round Table, we’re showing off the cover to the revised and updated edition of Hero High for Mutants & Masterminds 3rd Edition! Plus introducing you to the heroes in the latest lineup of the Next-Gen! We’ll cut right to important stuff and show off the cover first! 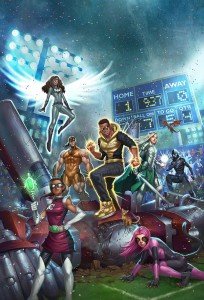 This is the cover image before we add any other graphic elements such as the Hero High title and logos, but it’s great to see this come to life!

This image was born from a discussion between M&M game designer Steve Kenson and me. I sent him a paragraph about two different ideas, one in which the characters were standing on some bleachers with a defeated enemy on the gym floor in front of them and the second idea was them standing on a giant defeated robot. Clearly, the ideas were combined Voltron-like into the above image, which shows the heroes standing on a defeated robot (a Probot from the Terminus, also featured on the cover to the Gadget Guides) in front of outdoor bleachers!

Seven of the eight members of the Next-Gen from the updated Hero High are shown on this image. We couldn’t squeeze Blue Bolt on the cover, but he’s featured in the Mutants & Masterminds Quick-Start that’s currently in the works. Blue Bolt was featured in a couple of Power Profiles and we liked the character design Sean Izaakse came up with so much we decided to use him as a character in Hero High!

Because the Next-Gen is a team made up of students at the Claremont Academy, its lineup changes frequently. The members of the team featured in the original Hero High are now out in the real world, dealing with challenges all their own. (You’ll hear more about them in Freedom City when it’s released later this year.) Now, let’s meet the new lineup of the Next-Gen so you can be prepared for them when Hero High is released in a couple of months. (We’re commissioning the interior art now, but the cover and text is finished!)

Blue Bolt is Jae Murphy, a Korean-American kid from Irvine, California. He’s a half-human/half-alien with the ability to generate and sense electricity, cause blackouts, and make quick jumps in the form of living lightning. He’s a thrillseeker who’s in love with the idea of being a superhero.

Catalyst is Reena Sarin, the daughter of Indian immigrants and is from Florida. She’s a very smart, impulsive girl whose body produces incredible amounts of excess bio-energy. Initially she could only generate a powerful energy blast that exhausted her when she used it, but she built herself a control rod that stores and allows her to control her energy to create a wide variety of effects. She’s determined to prove herself a valuable member of the team, but her unluckiness and destructive powers make that difficult for her.

Elflight is Alea Arlissan, a half-elven girl from Tuatha, the realm of Faerie. She came to the Claremont Academy at the suggestion of Seven, who she helped on a recent quest that took her to Tuatha. Elflight wields the powers sword known as Whitestar, has mastered a few spells, and is accompanied on Earth-Prime by her dragonling familiar Phoros. She is motivated to be a force for good in the world–and to hunt down and deal with supernatural threats.

Junior is Wally Thompson, Jr. and he’s actually a young sasquatch from the Cryptid Clans found in the wilderness around Emerald City. Abandoned by his parents on the doorstep of an isolated farm, Junior was adopted and raised as a human child. As a young sasquatch, he still looks mostly human, but is incredibly strong, has a connection to the natural world, and possesses a supernatural ability to hide from view. Junior was raised right and believes he should try to make the world a better place.

Miss Kitty is Amelia Cero. Her family owns CeroSoft, a software manufacturing company in Chicago. Her grandmother gave her a beautiful Egyptian cat statuette which was a family heirloom. The statuette came to life in the moonlight and explained Amelia was the next in line to be granted powers by Bastet and act as her emissary on Earth. Calling herself Miss Kitty, Amelia became a hero, but as soon as her parents discovered what she was up to, they sent her to Claremont Academy. Despite her youth–she’s 14–Miss Kitty is one of the most experienced heroes on the team.

NGM is Martin Conte, grandson of Leroy Conte, the Civil Rights-era hero known as the Golden Marvel. When Leroy was released from Buckner Ridge, better known as Lockdown, and he saw the difficulties Martin was having, he decided to pass on the golden light he possessed in the hopes it would give the boy a purpose and prove he could make a difference. Now, Martin, as NGM, is a powerful, overconfident, and angry young man. He wants to do good and he especially wants to be recognized for doing good.

Silver Eagle is Nina Cruz, the daughter of two AEGIS agents, one of whom was exposed to large doses of interdimensional energies during the Terminus Invasion. Since birth, Nina has possessed “argent energy” she can use to fly, enhance her already considerable strength, protect herself, create objects from the energy, and generate destructive blasts. Silver Eagle was trained by AEGIS for a number of years and is a patriot through and through. She’s also the most responsible of the students and has been at the school for years.

Wraith is Luke Dixon, the son of a scientist for the Foundry. When he learned what his father did, he ran … right into a war zone where he was blown to bits. Rather than let his son die, Malcolm Dixon rebuilt him using the “living cybernetics” he was experimenting with for the Foundry. Unlike so many before him, Luke survived and was rescued during an AEGIS raid. Now recovered from his transformation, Luke feels less than human despite his enhanced strength, speed, and toughness. Wraith believes he should make the best of his abilities and feels it’s his responsibility to use them to help others.

The Next-Gen are designed as PL8 heroes, which is the recommended power level for teen heroes in Hero High, so you and your friends can use them as player characters if you want to get started playing right away. Be on the lookout for more information on the Next-Gen and Hero High in the coming weeks!