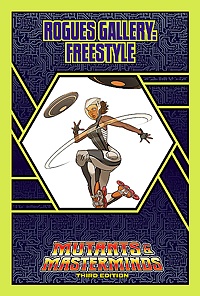 When you grow up in wealth and luxury, you’re loath to let it go—especially when all that money is embezzled by company executives. Young Aaliyah Travers and her father were close to losing the company he’d built from nothing until

Aaliyah suggested using it to provide tech support and repair to villains who needed it. Their plan worked! And it worked even better when Aaliyah, always an adrenaline junkie, began stealing high-tech secrets from other companies as the unpredictable Freestyle!