Hi, I’m Reena Sarin, but in my superheroic identity I go by the name Catalyst! I’m probably the coolest member of the Next-Gen with my tech skills, innate mutie powers, and home-made control rod. I’m like the poster child for girls in STEM! (That’s science, technology, engineering, and math, in case you weren’t aware.)

Anyway, with the new Hero High book on the way, the folks at Green Ronin recruited me to talk to you about making the most out of your time at Claremont Academy. The book is packed with pretty much everything you’d want to know about the school and offers a lot of options for setting the school in different places, like in the middle of a huge city (fun!), in a rural area (yawn!), in a specific neighborhood in a larger city (cozy!), in a mobile game where everyone is on the run from something or someone (exciting!), in a satellite so you can travel the world (cool!), in a spaceship traveling through space (spaaaaace!), or as part of a dimension-hopping team that gets to see new worlds all the time (awesome!)! I don’t know what sort of game you’re into, but you can pretty much do anything you want with the advice offered in the book and a little imagination.

Geez, there’s so much in this book about customizing the school to fit how you want to use it that it’s hard to pick something else to talk about. I mean, seriously, there’s bits on the sorts of classes the school offers, suggestions to help you come up with personalities for teachers, the sorts of adventures that can arise from kids in a school. There’s information on changing the school from being run as a private school to being part of a government program or making it a totally secret facility—probably to keep the kids safe from the outside world … but also to keep the kids from, like, blowing up the neighborhood, too. There’s even ideas to help players figure out how their heroes ended up coming to the school. I thought that part was pretty cool and gave me some interesting ideas.

I feel like I’m going on and on about all this stuff. Rather than listening to me babble, here’s the section on running a Hero High series (I totally lifted this right from the book):

There’s a few givens about a series set at Claremont Academy. The first is the series likely involves elements like coming of age, interactions with their peers, and the excruciating climb to maturity through love, friendship, and heartache. Drama is a major cog in school-centric games, and while it’s not necessary to run that style of game, those elements are often crucial.

That doesn’t mean there aren’t additional options to a Claremont Academy series, however. And, it doesn’t mean these options have to last longer than a school year, taking the heroes on an extended story arc that starts in fall and ends by the spring. The next year, a new story-arc or series begins.

EXPLORERS OF THE UNKNOWN

Duncan Summers, with help from heroes capable of ex­ploring other dimensions, is still probing nearby dimen­sions, looking for powered teens in need of sanctuary. Whenever he (or his allies) locates one, he requires help in rescuing them and finding a new place for them to live (it may not always be Earth-Prime). For this, he might require the heroes because of their particular talents or because no one else is available and the mission should be an in­teresting field trip. In addition to the schoolwork, their ex­tra-curricular activities, their friends, and the adventures they find themselves in, Summers’ dimension-hopping allies may “borrow” the heroes to rescue someone in need.

Duncan Summers has always managed to keep Clare­mont Academy’s history a secret, but the fact is, there was a reason why the property got turned from a failing estate into a private school, and why the private school eventually failed (as mentioned in History). Now, Claremont Academy’s secrets are once again rising up to bring misery to a new generation of inhabitants, unless the heroes can somehow break the cycle once and for all.

The school has been home to beings capable of traveling to other worlds for years. Their repeated travel to and from Earth-Prime from the school’s grounds has breached the dimensional membrane over the years, leaving behind micro-cracks between this reality and other worlds. Now, creatures that live in the interstitial buffer between di­mensions are seeping into the Academy and wreaking havoc. Sometimes they manifest as deadly, horrible crea­tures, and sometimes they inhabit and mutate the living (plants, animals, people). This results in a monster-of-the-week scenario where, in addition to managing their lives, the heroes encounter emanations of these creatures. Meanwhile, they have to discover where these creatures are coming from and how to seal the breach (possibly at the point of a major incursion).

One of the new students at the academy is not who she appears to be. She is a recruiter for a villainous organi­zation, sowing dissent among the students, coercing teens into joining her organization (such as SHADOW or the Elysian Academy in Emerald City or one of the other Shadow Academies), and eliminating anyone who sus­pects her. She may be running her operation as an under­current in conjunction with another story arc, meaning she’s in position to feed her masters information and warn them of potential raids and attacks.

The living city X-Isle (see Freedom City) has managed to snake its tendrils into the school, creating tunnels beneath Claremont Academy. Now, students are finding these tunnels and disappearing. They’re ending up in another version of their school that X-Isle created and are won­dering where everyone went. Can the heroes find these tunnels and the mirror school? And if they do, can they help rescue everyone and make their way back home?

Cool ideas, huh? Like I said, you can totally make your game however you want it. I mean, the default setting has the Claremont Academy being like a nice, private school near Freedom City. It’s got a bunch of super-powered kids, some of whom (like me!) who are training to be superheroes someday and some of whom are just learning to use their powers so they can get on with their lives … and a few who might not have the best of intentions. High school is full of drama. You know how it is.

I don’t know what else to say, so I’ll show off some of the art from the book. Check it out and I hope you come visit the school! 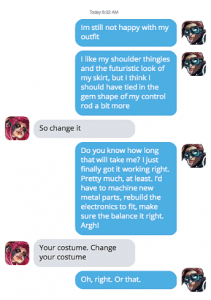 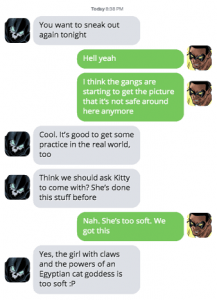 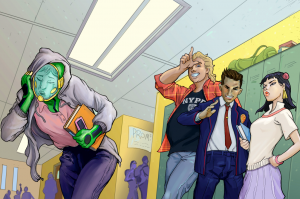 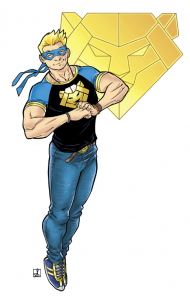 Ronin Round Table: The Price of Success
Scroll to top Skip to content