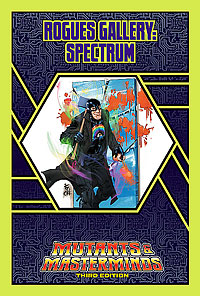 We have a new Rogues Gallery issue this week: Spectrum!

The son of the Silver Age villainess known as the Color Queen, Spectrum is a self-righteous art critic turned super villain thanks to his mother’s exposure to the alien artifact she wielded for years. Now Spectrum tries to raise the public’s attitudes toward art—or at least the art he feels is worthy!

Ronin Round Table: How to Get the Most Out of Hero High by Catalyst
Scroll to top Skip to content