About a month ago I attended the DICE Summit in Las Vegas. The DICE Summit isn’t normally part of my convention rotation but I was invited to sit on a panel about what electronic games can learn from tabletop gaming and that topic is decidedly in my wheelhouse. The panel was moderated by Randy Pitchford of Gearbox and my fellow panelists were Mike Mearls of Wizards of the Coast and a colleague formerly of the tabletop business who made the move to the videogaming world, Josh Mosqueira, lately of Bonfire Studios. If you missed the livestream of t 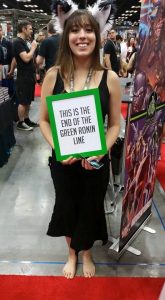 his keynote, and are really, really curious to see how it went down, you can watch the whole thing here: https://youtu.be/F4vLd9cZW2o

The DICE Summit includes game design students and students of other game-related studies in their conference, something I was only vaguely aware of when I participated on the panel. During the coffee hour following our talk, I found myself speaking with first one, then two, then six, then nine female students who are pursuing game-related studies and who were downright eager to hear about opportunities in tabletop gaming. I left the conference feeling very enthusiastic about the diversity represented by these young women and was reminded once again that our industry is relatively young and started so very, very white and very, very male but that has been consistently changing for the better year by year.

One thing that has concerned me over my years as a professional is the lack of a mentorship culture in tabletop gaming. I wrote a whole essay about it for Elisa Teague’s collection, Girls on Games and despite pondering the problem from a few different angles I’m still at a loss on how to best address that situation. This is not to say that individuals don’t mentor others in certain circumstances, just that there is a distinct lack at the level of the game industry’s biggest organizations that doesn’t exist in other professions.
Still, just because there are challenges (even big ones) doesn’t mean that I’m satisfied to just coast along and wait for someone else to make a difference. I like to think that I walk what I talk, personally and professionally. Try to, anyway. I was very pleased to be a part of Gen Con’s Industry Insider Featured Presenters advisory committee last year when we achieved gender parity in invited speakers for the first time. Closer to home Blue Rose is hitting hobby distribution in April and is undoubtedly our most recent public example of Green Ronin’s interest in both portraying diverse characters and attracting diverse players to go along with them. We’ve also expanded and changed up our team, from our convention staff to our line developers, and not only have we gotten to know and work with some great women in the process but we’ve added some excellent new perspectives and approaches to challenges that have helped make Green Ronin a stronger and more productive company across the board.

2017 is still young and I’m excited about the projects we have brewing from now into early next year. We have some new projects, some exciting bits of news, and some upcoming freelancing opportunities to talk about in the coming months. Some of the projects I’m most excited about haven’t been announced yet but more information about every little thing will eventually appear here. Watch this space Mondays.