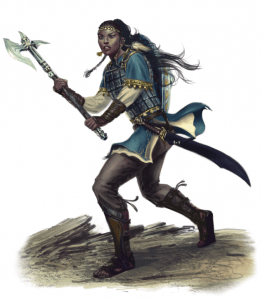 Hey folks, Jack here.  So in coming months we’ll be delving further into various setting elements for Fantasy AGE.  While the game is consciously designed to be used in a variety of fantasy setting and campaigns, we at Green Ronin are working to build and develop our own unique world for the game.  You can see some of this in the fiction and concepts we have introduced to date in products like Fantasy AGE Encounters and the Bestiary.  While you don’t ever need to use our setting materials to have fun with Fantasy AGE and use it in your own games, we do recognize that building such a setting is useful for many customers, as well as for us internally.

One thing we haven’t detailed yet though are any of our iconic characters.  We don’t have big metaplot-heavy characters in Fantasy AGE, but we do have some PC-like heroes who feature into some of our art throughout the books. Chief among them are the three class examples, a trio of characters who also show up on our covers of the core book and Bestiary.  Who are these folks? Well, I’m glad you asked…

We begin with Aza, seen as the brave warrior woman more than willing to tackle ogres, ghouls, and other threats for the right cause or the right price. Here she is presented as a level 5 character.

A skilled warrior, Azadrumoda (“mighty leader”) or “Aza” was trained from a young age to serve as one of the elite guards for her kingdom’s nobility. When the noble she was sworn to protect was declared a traitor and their line extinguished, she was exiled. Since then she has lived as a mercenary and freelance adventurer. While she occasionally bristles at the loss of her old life, she is generally quite happy to seek fame and fortune in a land where no one knows the details of her past troubles.

Losing her life of duty and sworn allegiance sometimes wears hard on Aza. She punctuates her normal bold and valiant personality with moments of fatalism and melancholy. She is slow to trust, especially those in positions of authority. However, for her friends and those who truly earn her loyalty there is little she will not dare.

Aza is trained to use a variety of weapons.  She is rarely without her sword, Tyrant’s Pyre, a single-edged tulwar-style blade that burns with the heat and light of the sun. However, she will gleefully use axes, spears, tables, and unruly bystanders as necessary. In fact, she often finds her long-hafted battle axe of particular use when battles undead, ghouls, and the occasional stubborn door. She prefers lighter armor than some warriors, allowing her exceptional mobility.

Equipment: Long-hafted Battle Axe, Tyrant’s Pyre (Enchanted Long Sword, +2 bonus to damage and can burst into flame at will to act as a torch or ignite flammable objects), Light Mail, Dagger, Medium Shield

Note that Aza’s axe and sword are big enough for her to use with her Two-Handed Style if she desires.  She just can’t use her shield when she does so. In reality, most Fighting-based weapons can be used in this fashion, just another way warriors get a bit more versatility with their melee abilities in Fantasy AGE.