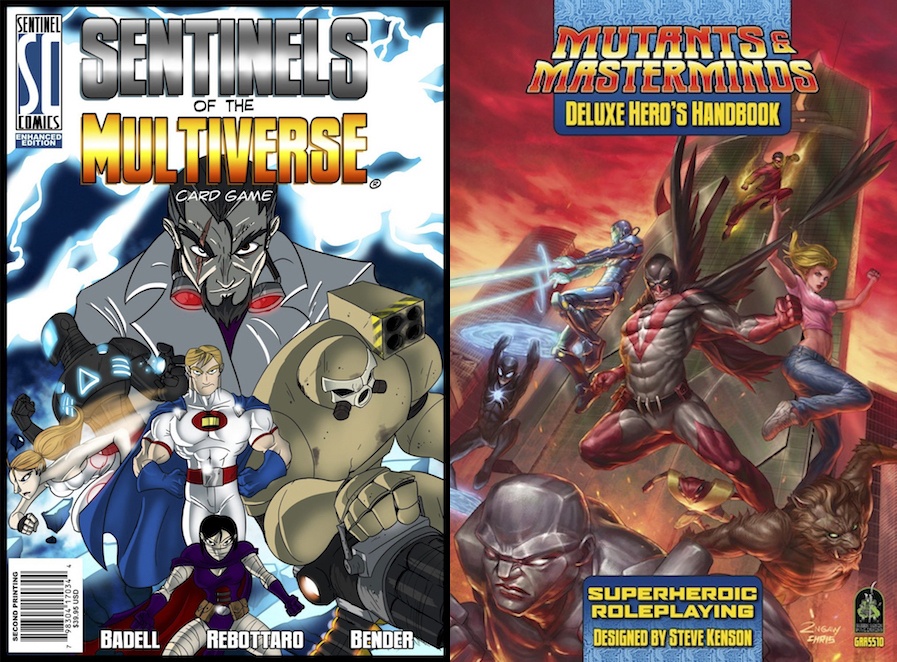 Mutants & Masterminds is Green Ronin’s longest running RPG, first debuting in 2002 and receiving continual support ever since. The game’s very first supplement, Freedom City, introduced a world that we’ve continued to expand upon over the years in ways big and small. This culminated in January with the release of the Atlas of Earth-Prime, a full world book for the setting. It was a fitting way to celebrate Mutants & Mastermind’s 15 year anniversary but there’s more to come. The Third Edition of the Freedom City sourcebook is coming out in June. And later this month we’re launching a Kickstarter for the first ever Mutants & Masterminds card game, Sentinels of Earth-Prime!

I’ve long wanted to bring some of our RPG properties to the world of card and board games and Sentinels of Earth-Prime is our chance to do just that. It’s happening because a few years ago I started playing a lot of Sentinels of the Multiverse from Greater Than Games. I got to know its designer, Christopher Badell, on the JoCo Cruise and it turned out he was a long time Mutants & Masterminds fan. Comics, of course, are no strangers to crossovers and team ups, so it didn’t take long for us to start talking about doing a project together. The result will take Christopher’s excellent Sentinels of the Multiverse rules and our Mutants & Masterminds setting and combine them together into a powerhouse new game, Sentinels of Earth-Prime! As you may have read in our press release a few weeks ago, this will be a joint venture between Green Ronin and Greater Than Games.

Sentinels of Earth-Prime will have the same basic format as Sentinels of the Multiverse. It will include decks for ten heroes, four villains, and four environments. Naturally, I brought in Steve Kenson (designer of Mutants & Masterminds and creator of Earth-Prime) to help with the setting and story side of things. I wanted to use the classic Freedom League as the game’s heroes, as they had deep roots in M&M and conveniently consisted of exactly ten characters. Steve then suggested we use events from previous RPG books as the basis for our story, in particular the many invasions that the heroes of Earth-Prime had fought against over the years. The core game will concentrate on events that took place from 2002-2006 on Earth-Prime. Then we’ll advance the timeline in expansions down the road, until the card game and the RPG are synched up. In this way Sentinels of Earth-Prime will both explore the setting and serve as a tour through its recent history.

The Sentinels of Earth-Prime Kickstarter will go live the week of April 17. Follow us on Twitter (@GreenRoninPub) or Facebook to keep up with it and other Green Ronin news. We’re incredibly excited about this project and the chance to work with Greater Than Games. We’re starting a whole new chapter to the Mutants & Masterminds story. We hope you’ll be a part of it!

Ronin Roundtable: Musings on Women, Games, and the Tabletop Industry