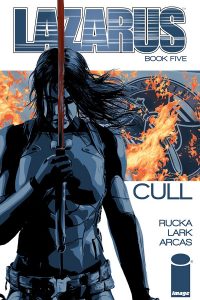 May 1, 2017—SEATTLE, WA: Green Ronin Publishing announced today that it has signed a licensing agreement with Greg Rucka to adapt his critically-acclaimed Lazarus series from Image Comics as a setting for its forthcoming Modern AGE Roleplaying Game.

“We are huge fans of Greg’s work and of Lazarus in particular,” said Green Ronin President Chris Pramas. “The comic’s vision of a world dominated by corporate families and featuring staggering levels of income inequality becomes more relevant by the day. Lazarus tells a powerful story and soon you’ll be able to add your own chapters to that around the table.”

“I’ve been a gamer since I was ten years old,” said Greg Rucka. “RPGs, in particular, have been an important part of my life in so many ways—as recreation, of course; as entertainment, as a means of escape, yes; and, honestly, as an enormously vital part of my development as a writer, and, I would hazard, as a human being. My best friends were made long ago around the gaming table. To have been part of creating something with Michael Lark, and to have that creation standing strong enough that Green Ronin sees its potential as a gaming world, might just possibly be the greatest compliment I could ever receive. It sounds hokey, I suppose, but it’s true—as someone who has spent days, weeks, months, exploring the worlds of others at the gaming table, to add to that is a big deal.

“That I get to do so with Green Ronin makes it all the more of a joy for me. Chris and company know their stuff inside and out, and more, they know where the mechanics end and the story needs to begin. I couldn’t be happier to be working with them on bringing Lazarus to RPGs.”

Green Ronin will publish the World of Lazarus this Fall. The book will present Lazarus as a setting for the Modern AGE RPG, which will be released concurrently. Modern AGE takes Green Ronin’s popular Adventure Game Engine—as seen in the Dragon Age, Blue Rose, and Fantasy AGE RPGs—and adapts it to the modern action genre.

More information and previews for the World of Lazarus and Modern AGE will appear on www.greenronin.com in the coming months.

About Green Ronin Publishing
Green Ronin Publishing is a Seattle based company dedicated to the art of great games. Since the year 2000 Green Ronin has established a reputation for quality and innovation that is second to none, publishing such roleplaying game hits as Dragon Age, A Song of Ice and Fire Roleplaying, and Mutants & Masterminds, and winning over 40 awards for excellence. For an unprecedented three years running Green Ronin won the prestigious GenCon & EnWorld Award for Best Publisher.

About Greg Rucka
Greg Rucka is the New York Times bestselling author of over a thousand comics and at least two dozen novels. He currently writes LAZARUS, co-created with artist Michael Lark, and BLACK MAGICK, with artist Nicola Scott, both from Image Comics, as well as STUMPTOWN, with artist Justin Greenwood, published by Oni Press. He has recently completed a critically-acclaimed run on WONDER WOMAN for DC Comics, and is currently writing the screen adaptation of his series, THE OLD GUARD, co-created with Leandro Fernandez, for Skybound Entertainment. He lives in Portland, Oregon, with his wife, two children, and a large and overly enthusiastic dog named Marlowe.