Thus, when I first started working on Blue Rose, it made me just a little bit sad to learn that Aldea had literal dog-people, but they’re shadowspawn monsters whose only avenue for participating in civilization involves hiring out as mercenaries to the most unscrupulous and undiscerning of employers. One of the themes of the game, however, is that no one is truly beyond redemption if they make the decision to champion Light, rather than Shadow. 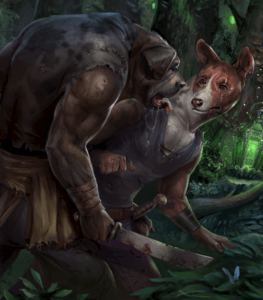 So—presuming the choice to embrace goodness over evil—what, exactly, keeps a mongrel from being a player character? A lack of stats, that’s what.

Neither human not rhydan, but instead something almost halfway between, mongrels have long plagued Aldea as the accursed creations of sorcery. Within them—in accordance with the wicked designs of the Sorcerer Kings who shaped their race amidst agony and misery—the reason and emotions of a sapient people war endlessly with the brutish instincts of beasts irreparably wounded in spirit, and most of them cannot reconcile these two conflicting natures, save through savage violence. Most, but not all.

One mongrel might’ve been taken in as a pup when their pack was destroyed or driven off, to be raised with the sort of love and kindness most of their kind will never know or understand. Another was perhaps found by compassionate Aldinfolk, grievously injured and frozen half to death, and nursed back to health, only to feel the inexplicable stirrings of a pack-bond with these gentle strangers and a desire to do right by them. Yet another might’ve simply always sensed that there must be something more to life than to hunt, pillage, and kill; some elusive yearning for nobler things that they found they could not satisfy in the company of their own kin.

Standing well taller than the average human and sporting the head of a dog or hyena, with mottled fur and canine lower legs, mongrels are utterly unmistakable as anything other than what they are. While they stand upright and have dexterous, human-like hands, they possess an inborn feral aspect that never entirely goes away, no matter how long they spend in the company of civilized people, and their voices have a growling, barking quality. To even the most personable mongrel, the world is as much a tapestry of potential threats as it is one of prospective friends.

Play a mongrel if you want a rough, primal character deeply in touch with their animal senses and instincts. Mongrels tend to be skilled hunters and fighters, typically favoring the expert or warrior classes.

If you choose to play a mongrel, modify your character as follows:

* If the class you choose provides this already, you can take the focus Fighting (Heavy Blades) instead.

This week is also your last chance to pick up the Blue Rose Bundle of Holding! Pick up the complete line of Blue Rose 2nd edition AGE products, as well as several of our fiction offerings from Nisaba Press, all while supporting the Pride Foundation. Don’t miss out on this amazing deal!