Folks who know me know that I am a tinkerer when it comes to rules and game design: I love to play around with different ideas for how something can get done in the context of a game, and I have notebooks and digital files full of ideas and random thoughts jotted down about particular rules and system concepts to try out or experiment with at some point. There are two particular Green Ronin areas of interest with my rules tinkering manifested recently. 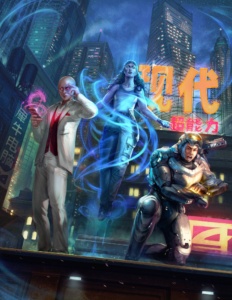 The first is in getting to work on sub-systems for extraordinary powers for the AGE System, particularly Modern AGE. Anyone who knows my work gets that super-powers of various sorts are a particular interest, so naturally I jumped at the opportunity to work on power systems for AGE, starting right from the design of the Fantasy AGE and Modern AGE Basic Rulebooks. I wrote the Powers chapter of Modern AGE game, adapting the magic system of Fantasy AGE to present systems of spellcasting and psionic in the core game. Then I got to expand on those systems for the Modern AGE Companion and particularly the Threefold setting, which offered setting-specific examples of magic and psychic powers, along with expanding upon extraordinary powers.

From there, I got to build-out both psychic and extraordinary powers even further for the forthcoming Modern AGE Powers sourcebook, and adapt extraordinary powers and the augmentations sub-system from Threefold for a more general cyberpunk style. That material, it turned out, was useful for The Expanse as well, since we know there are some cybernetics and body augmentations in the setting, so we were able to adapt the core of that material for another AGE System game as well! Most of this development and tinkering went on with manuscripts that haven’t yet seen print, so there were also opportunities to go back and apply later developments to some of the earlier stuff. If you’re going to be working under pandemic conditions where product releases are delayed, at least take advantage of the longer development times!

Similarly, our conversations on Mutants & Masterminds Mondays sometimes inspire the desire to tinker with particular aspects of the game rules. That’s where an article on what I called “Challenge Points” came from for the M&M Patreon: We discussed the concept of first edition’s “Villain Points” and some similar mechanics introduced in more recent M&M adventures to provide Gamemasters with different balancing tools to make encounters sufficiently challenging and interesting. I summed-up a lot of what we discussed in writing, added a few extra details, and presented it to our patrons for their feedback and use. Seems to have gone over well, so chances are we’ll look to share some other rules-tinkering ideas on the Patreon in the future. Who knows? Maybe some of those ideas will find their way into official game releases at some point. I know that both M&M Developer Crystal Frasier and I have already written additional articles along those lines and have some ideas for others.

Do you like to tinker with the rules of your favorite RPGs? Do you enjoy designer speculation and ideas for variant rules or optional systems? Drop us a line at letsplay@greenronin.com and let us know about it or about the sorts of things you’d like to see. You might well inspire us to go in and tinker with something new!

December Sale for Christmas
Scroll to top Skip to content