The final season of Game of Thrones has special significance to those of us at Green Ronin Publishing, since we worked with George R.R. Martin on A Song of Ice and Fire Roleplaying when the successful show was just a concept. If you haven’t checked out the RPG—or even if you have, but your collection is incomplete—don’t miss out on the current offering from Bundle of Holding, available for the next week or so, where you can get all of the PDFs of the game line, including some Chronicle System supplements, for one bargain price. 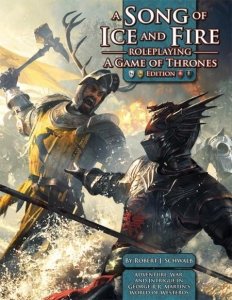 Of course, a number of things about the world of Westeros and the saga of A Song of Ice and Fire have been revealed since the RPG core book was published, and Game Masters might want to add some new elements to their SIFRP games. In honor of one of our favorite Game of Thrones characters and the final season of the show, we offer a small additional quality.

You are no one.

Requires Face in the Crowd, Furtive or Talented (Stealth), Treacherous, one or more Fighting quality, and sponsorship and training at the Temple of the Many-Faced God

You have mastered the arcane art of face-changing. If you kill a target, you can take their face and wear it, effectively becoming that person in appearance and voice. Under ordinary circumstances, this gives you a flawless disguise. Even those with reason to be suspicious of you can only detect something is amiss with Hard (15) Awareness (Empathy) test and even then may not realize the extent of your deception until it is too late. You automatically surprise anyone unaware of your true nature and gain bonus dice equal to your Cunning, in addition to the usual +1D.

You can save faces you have added to your collection, storing them for later use. It takes about a minute to don a face and assume its form, but you can remove a face you are wearing (ending the guise) as a lesser action, if you wish.