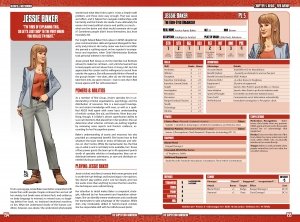 Last week we took a look at the meat of the upcoming SuperTeam Handbook: The team outlines. We took a look at how each team is provided with plenty of material for GMs and players alike to build a campaign around them, using either their own custom characters or the sample characters provided for each team. This week, let’s take a look at one of those sample character. Keeping with last week’s preview of AEGIS: Red Group and go with the team analyst, Jessie Baker!

From a young age, Jessie Baker was better acquainted with books than with people. People confused her and set off her anxiety, but books were all about facts and evidence; no body language to misread, no missed cues, no laughing behind her back, no irrational emotional reactions, no lies. What she understood clearly of the human condition, however, was desire. She understood what people wanted and what they’d do to get it. It was a simple math problem, and those were easy enough. That was cause and effect, and it helped her navigate relationships with her family and the friends she made. It was ultimately the reason she loved political science and politics so much…what was the desire and what would someone do to get it? Sometimes people didn’t know themselves, but Jesse invariably did.

Her insight helped Baker find a place in AEGIS despite her poor communication skills and general disregard for hierarchy and protocol. Her rocky career was due to end after she penned a scathing report on her superior’s incompetence and nepotism, when Chief Administrator Bonham took personal interest in her skillset.

Jessie joined Red Group as its first member, but Bonham refused to make her cell lead—not until she learned how to lead people and not abuse them. It stung a bit, but she appreciated his candor and his willingness to recruit from outside the agency. She still personally thinks of herself as the group’s leader—she does, after all, see the leads that take them into any given mission—but no one else in Red Group agrees with her self-assessment.

Jessie is the “I’m not very likable, but I am very, very good at what I do” character that pops up in so many TV procedural dramas, reflected by plenty of well-spent skill ranks and carefully chosen Advantages. With a keen eye for patterns, she’s a natural tactician as well, letting her use Inspire to improve her teammates’ abilities despite her rough exterior. And her specialization is more defined with a pair of talent-style powers. “I Know a Place” lets her provide the team with rotating headquarters and specialty vehicles thanks to her extraordinary research and organizational skills, while “Watch for Patterns” lets her guess where and how trouble will pop up thanks to her study of criminal psychology. Neither of these abilities is a super power, per se, but help set Jessie apart from the rest of her team. She’s the fact-finder and resources mastermind, with just enough gunplay to hold her own if a fight starts (and clearly a fight wouldn’t be starting right now if everyone had just listened to her in the first place!).

Keen-eyed reads will notice that Jessie’s character sheet looks a little different than how we’ve presented NPC character sheets in the past in products like Rogues Gallery and Freedom City, 3rd edition. One of the big goals in putting together the SuperTeam Handbook was to have a product any group could crack open and start playing within fifteen minutes, regardless of the flavor of campaign they wanted to run with. So in addition to making sure every team included guidelines for the kinds of adventures they have and a list of likely opponents they’d face, we also took some time to re-organize the character sheet to be fast and user-friendly for players. The hope is that everyone at the table can print a single sheet, front and back, and have everything they need to begin their adventures.

Tune in two weeks from now when we take a look at the bonus NPCs the SuperTeam Handbook provides in the form of Mentors and Nemeses!

Ronin Roundtable: Death Has Many Faces
Scroll to top Skip to content