A funny thing happened on the way to making Sword Chronicle.

Sword Chronicle was based on the simplest of ideas: Taking the popular Chronicle System, which powered the now-concluded A Song of Ice and Fire Roleplaying Game, and using it to make a fantasy game that wasn’t connected to any licensed intellectual property. Green Ronin had already explored this space a little by creating PDF supplements for the Chronicle System that weren’t tied to any particular setting. That gave us the advantage of producing an all-new game using the system that already had support. Good stuff! 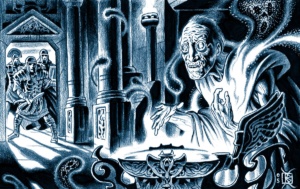 However, as a full-fledged roleplaying game, Sword Chronicle needed to provide a place to run campaigns: a setting of its own. Furthermore, this needed to get done quickly, since we wanted to release the game quickly.

Any sizable, longer-lived game company works on ideas that, for one reason or another, don’t turn into published material. That includes game settings. So, I looked around in the Green Ronin Vault (note: I just made this name up) and found a setting that, with a little adaptation, could work for Sword Chronicle. This had been called Shattered AGE, and had originally been designed for Fantasy AGE. For various reasons we didn’t stick with it, but the setting, designed by Jaym Gates and Jack Norris, had some solid bones. Its factions were suited to Sword Chronicle’s house systems. Best of all, it represented a departure from many of the assumptions of medieval fantasy without moving away from the most accessible elements or a play style suited to the Chronicle System.

Jaym wrote a draft collecting critical elements of the setting, and I got to work developing. First up, a name change. It became the Shattered Era, since we typically reserve the word “age” for, well, AGE. Next, I expanded and particularized one of the main ideas of the setting into a particular flashpoint: a time and place where multiple houses, including those controlled by players, could vie for power. A few stylistic flourishes later, and we had a setting for Sword Chronicle.

The last chapter of Sword Chronicle introduces the Shattered Era setting through the Breachlands. Once, the world of Annarum was the jewel in a crown of worlds, linked through high magic that harnessed the power of the stars. But some stars are evil, and one, the Unbidden Light, fell to Annarum, severing the ways to other realms—except for certain breached through which it drew strange creatures and fearsome armies. Using some of the last of the high magic, the dwarves made the Wall, which divided the “fallen” realms from the survivors.

Not long ago, the Wall fell.

Not long ago, the descendants of the Eastern “survivors” discovered that the peoples of the other side, disparaged as the “Monster Kingdoms,” had flourishing civilizations of their own.

Between them stands the Breachlands, a region inhabited by the survivors of its fallen cities, which were abandoned when the Wall went up. Now they’re nomads, whose territorial claims are all but ignored by nations on both sides of the former Wall, who see opportunities to benefit from the peculiar form of invasion called “colonization.” The rotting Aglam Empire would conquer the Breachlands to reverse its decline. The elves of Fal-Lossthar border the Breachlands, and fear encirclement, while the dwarves of Glassmere have just discovered their cousins on the other side of the Wall have thrived, and with them the Kamtain, or ogres, who were plucked from many worlds for unknown reasons, but now assert themselves as a rising power.

Joining them are mercenaries, religious military orders, and fiefdoms ruled by a combination of intrigue, military force, and sorcery. The high magic may be gone, but sorcery—the subtler arts of power—remain in the hands of a learned few. And on the Western side of the wall, in the Monster Kingdoms, dwell unknown peoples. The four-legged Kurgulan are swift, resolute warriors, strange for Easterners to behold, but their motives are somewhat comprehensible. The same can’t be said for the four-winged Nethuns Sar, master of the Black Prism. Nor do rumors of an invisible kingdom of air elementals, of the snake-beings further west, or of the Mixutul, said to be born dead, reveal any greater pattern to the Monster Kingdoms.

Tailored for Sword Chronicle, the Shattered Era setting includes descriptions of 18 houses with interests in the Breachlands. The game doesn’t assume you’ll use the setting, but it’s there, waiting for wide-eyed explorers and hard-hearted conquerors alike.

Return to Freeport
Scroll to top Skip to content