I’m flying down to Reno this week for the GAMA Expo (formerly known as the GAMA Trade Show), which is the major trade show of the tabletop gaming industry. Thinking about my impending trip brought my mind back to my very first GAMA Trade Show in 1996. This era was the pre-history of Green Ronin. We’ll be doing a series of articles and interviews to commemorate our 20th anniversary this year but let me set the stage by talking about the years before the company’s founding in 2000. 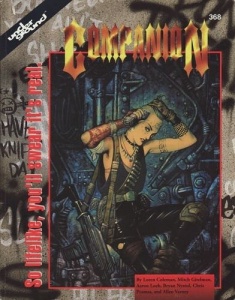 I got my start in the game industry as a freelance writer in 1993. My first work was for Ray Winninger’s Underground RPG from Mayfair Games. Over the following couple of years, I did work on other games like Warhammer Fantasy Roleplay (foreshadowing!), Over the Edge, and Feng Shui. After a couple of years of freelancing, I thought it was time to start my own company. This I did in 1996 with two partners (my brother Jason and Neal Darcy) and we bought a previously published RPG called the Whispering Vault that I had done some work on. We called ourselves Ronin Publishing and had the idea to each take a different color-coded screenname for company business. I was the Green Ronin (if you ever wondered what was behind the company name, that’s it).

While we were laying the groundwork for the company, I attended my first GAMA Trade Show to get the lay of the land. GTS used to move around in that era, and in 1996 it was in Atlantic City, an easy trip from my NYC apartment. Future Green Ronin co-owner Nicole Lindroos was in Vancouver, BC at the time, publishing a magazine called Adventures Unlimited with a group of writers that included the late, great Nigel Findley. Since they could not be at GTS that year, I agreed to take samples of the magazine around to various RPG companies and help promote it. I also helped out at the booth of the Small Game Publishers Association. The SGPA (later just the GPA) was an organization of independent publishers who pooled resources to get booths at various conventions and promote their games. 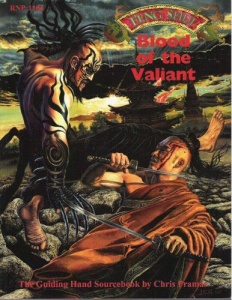 Blood of the Valiant: The Guiding Hand Sourcebook for Feng Shui

I had been going to GenCon since 1989 and freelancing since 1993 so the industry wasn’t new to me, but this was my first GTS. Trade shows are different than consumer shows. They are a place to talk to retailers, distributors, and fellow publishers about the new hotness, plans for the year, and industry scuttlebutt. My previous experience was hustling for freelance work and dealing with line developers but this was a whole different thing. This was the business side and it was new to me. I had just come out of grad school in 1995, where I was a history major. Business stuff I’d need to learn by doing it.

The next couple of years were indeed a learning experience. When we started the company, we agreed that we should try to get the rights to the Whispering Vault and if that proved impossible, I’d instead design a new game of my own. In retrospect, I wish we had done the latter. I had an idea for a game where members of various magical traditions banded together under Allied auspices to fight occult Nazis in WW2. Imagine an Aleister Crowley type and a Siberian shaman punching Nazis together with magic and you get the idea. My plan was to use tarot cards in the game’s core mechanics. Other games would tread this ground later but mine would have gotten there first if we hadn’t bought the Whispering Vault. Ah well. It seemed like a good way to jumpstart a company, and the idea was to do my game later. That never happened though. In two years, we only managed to publish one supplement for Whispering Vault called the Book of Hunts, and then a Feng Shui supplement called Blood of the Valiant. I had originally written this freelance for Daedalus Entertainment, the game’s original publisher, but I secured the rights to publish it myself as they were sinking under the waves.

I can’t beat myself up too much over Ronin Publishing though because the biggest problem was that we were ridiculously undercapitalized from the start (this is true of almost every RPG in history). I was working as a barista in NYC when we started, and then doing temp office work in Boston when I moved there to join my partners in the summer of 1996. None of us made real money so everything was done on a shoestring. Coming out of the punk scene as I did, my DIY roots certainly helped but it was a slog. After a year in Boston, I decided to move to Seattle. This was for love, though the possibilities of living in a center of gaming did not escape me. I continued to both do freelance work and try to run Ronin Publishing once I got to the West Coast. Indeed, for six months I tried to support myself only with freelance writing (pro-tip, don’t do this!). 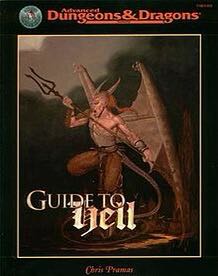 In March of 1998 I got a job as an RPG designer at Wizards of the Coast. I tried to keep Ronin Publishing going but the writing was on the wall. I was hired at WotC to work on an attempt to marry D&D and Magic: The Gathering. Due to internal bickering at the company, this project was not long for this world, so after a few months I switched over to writing for AD&D, 2nd Edition. This was the later 2E era, when 3E was in development for a 2000 release (more foreshadowing!). I wrote books like the Guide to Hell, Vortex of Madness, Slavers (with Sean Reynolds), and the Apocalypse Stone (with Jason Carl). If you’d like to hear me talk about this era and the early history of Green Ronin, I’ll be a guest on Fireside with Peter Adkison on Gen Con TV on March 18.

I worked at WotC from 1998 to 2002, founding Green Ronin smack dab in the middle. I’ll tell you how that happened next time!

School’s. In. For. EVER! (Ronin Roundtable)
Scroll to top